The ''Red Rovers'' was another American Volunteer Militia Unit, raised to support The Texan Rebellion of 1835. Much like other Units – such as The New Orleans Grays, they were a uniformed Force recruited mostly from Courtland County, Alabama. Commanded by John Shackleford (a Doctor and later noted Politician), The ''Red Rovers'' nickname came from their use of Red (Russet) colored ''Hunting Coats and Trousers'' (then used as a standard State Militia uniform in Alabama).

Roughly 70 Officers and Men joined The Red Rovers on their journey to Mexican Texas, to support General Sam Houston in his raising of The Army of Texas. Arriving by Ship in January of 1836, they were placed under overall command of Colonel James Fannin.

Their first (and only engagement was at The Battle of Coleto (1836). The Red Rovers fought valiantly against several Mexican assaults, forming an Infantry Square. Running out of ammunition and suffering overall casualties with the rest of Fannin's Command, The Red Rovers were forced to surrendered. They and others of The Rebellion, were marched to The Village of Golliad. There, with their injuries tended to, The Rovers looked towards being prisoners of war.

However, and despite the pleadings of Mexican Junior Commanders to avoid harsh reprisals – Generalissimo Santa Anna ordered ANY Texan Revels captured to be treated as Pirates. As such, there were to be summarily executed. Fannin's Command, in thinking that they were being marched to another location – were taken outside The Village, and massacred. All told, 450 Texan Militia (including The Red Rovers) – were killed (save 4 men).

Commander John Shackleford escaped murder based simply on the fact that he WAS a Doctor – and that his skills could be used to treat wounded Mexican soldiers. It kept him alive and allowed him to survive The War. 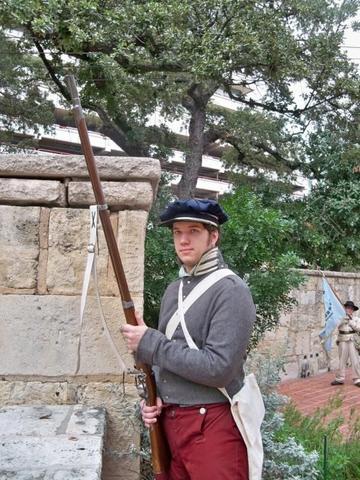