In yet another example of Ancient Roman “Throwing Weapons” (Ranged), The Aklys were solid iron Spear shafts, carried by Roman Soldiers (normally carried on the inside of The Scutum Shield). Dating from the 2nd Century AD forward, they were roughly 6-feet long. Of solid construction, to include it’s attached Spear point, they were normally thrown with the aid of a leather strap called an “Amentum”. Used much as the pre-historic “Atlan”, this device allowed a Soldier to heft The Anklys much farther that a traditional unaided throw. Some Historians cite The Anklys was actually used by a pre-Roman Tribe in Northern Italy, called The Osci of the 1st BC Era. A common Aklys tactic was the previously discussed “Cloud” tactic, in which massed Soldiers threw such weapons together – creating a devastating “wall” or “cloud” of iron Spears. Weighing around 1.5 to 2-pounds, they were effective also when thrown downward from fortification walls. 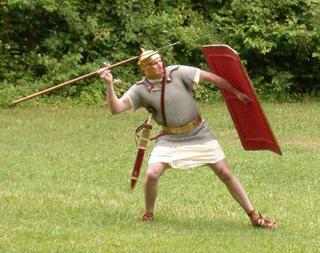