The development of Air Burst Rounds can be traced to 1780 and the development of Hollow Shot or Shrapnel Artillery Round. These rounds, unlike Solid Shot – was to explode above an Enemy Position (or that of an advancing Enemy Force), and explode from a pre-determined height. The result was to ''shower'' said Enemy in lethal (or incapacitating) fragments of steel or iron. Fuses, used in these examples were quite primitive, with many of these versions not exploding properly. By World War I, advances in fusing technology had advanced as such, that more reliable timed Shells could be used by Artillery. With the primary use of Trench Warfare, the need for Air Burst Rounds was critical. Shells needed to explode above such fighting emplacements to cause maximum damage and casualties.

By the mid-20th Century, Air Burst Round could be better controlled through radio wave technology and electronically time fuses, some of which could be controlled remotely. Such use was adopted for most Nuclear Armed Countries to control Air Bursts above targets. In such cases of these weapons, ground bursts were seen as being a waste of the device, as Air Bursts over a target as high as 25-miles would produce much more effective and devastating results. Air Burst technology was further used in Rifle Launched, Grenade weapons. As early as 1915, such Rifle Grenades were used also in Trench Warfare. This allowed the common Infantryman to more effectively use his Grenade, by launching it from a specially adapted Rifle.

When single Grenade Launchers were first experimented with in 1945 and later, such Grenades were timed fused as well (as little as a 5-second detonation time). Examples of these would be The US M203 40mm Weapon. 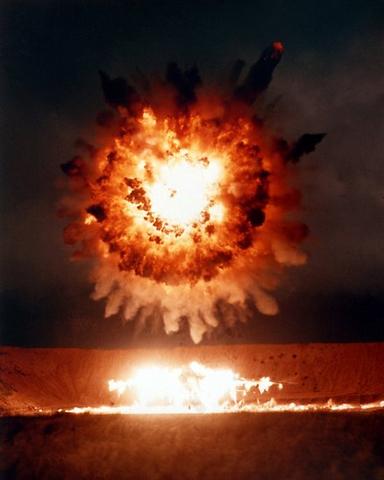