The decorative Military decoration known by The French as “Aiguillettes”, are a series of knotted braids (normally Gold), with various Gold or Brass fixtures attached. The are associated with the Military Position of Aide to General Staff Officers. Most Nations use a form of the decorative “Rope”. However, Aiguillettes are much older in History. Developed around the 16th Century as a type of embellishment for the clothes of Nobility, they were also seen in a form, on Armor. Pieces of Linen or cloth was used to join Armor components in lieu of leather straps. These pieces were twisted for strength. Often much longer than wad need to join components, the excess was allowed to hang freely. Soon, the style was used as a type of Armor decoration.

By the 17th Century, The French had started to design braided cords to identify General Officers. Aides to these Officers (Juniors), began to wear them to identify their position to their Generals. Eventually, the braided style was adopted by specific French Cavalry to set them apart from other Horse Soldiers. Infantry and other Units types began to adopt The Aiguillettes in a similar fashion. Other forms of decorations would evolve from The Aiguillettes.

In construction, an Aiguillette consists of 3 to 4 braided ropes, interwoven into various designs. Brass tips or Shields are sometimes used as decoration as well. The Aiguillette is connected to the Uniform on either the front left or right. A loop is often latched under the Shoulder epaulet as well as a front Uniform or Blazer button. Gold colored braiding is the most common color scheme, but other colors are used (depending on The Country of origin). Aiguillettes are also common on Military and Civilian Band Units. In some cases, Ceremonial and Parade Units have adopted them today as well. 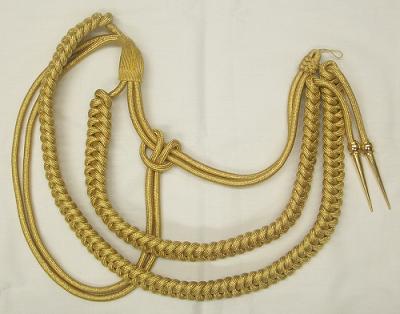