A chemical weapons, it’s compounds were known as 2,4,5 -T (Trichloropheno Xyzacetic Acid), and 2,4 -Day  (Fichlorophenox Yacetic Acid). These two combined chemicals were thus known as “Agent Orange”. This compound was a powerful anti-defoliant/herbicide that was dispersed on the air by Aircraft specially designed for this task. Originally designed by British and American Scientists towards the end of World War Ii, it was too be used on Japan, in the event that the detonation of The Atomic Bomb failed to convince them to surrender. Agent Orange was likewise experimented with briefly during The Korean War (1950-1953).

By the start of American involvement in Southeast Asia, it was quickly learned that Enemy Forces had the advantage of Centuries of using the thick Jungles as protection and for being able to maneuver with relative impunity. In many cases, the natural eco-system produced a “Triple Canopy” of tree and high brush cover  (over Centuries of growth). In some cases, daylight rarely (if ever), penetrated. To counter this, American Forces as early as 1961 (under a request from The South Vietnamese Government), deployed Agent Orange.

An arterial deployed chemical, The Agent was a mist-like substance, capable of belonging carried on the air currents. Upon contact with organic plant material, it would first destroy the foliage ability to produce chlorophyll. Within 48-hours the plant was dead, with surrounding Upper soil contaminated. In roughly 1-week, 2.47-acres would be reduced to compost. It is estimated that over 8 Million Acres were sprayed with Agent Orange defoliant.

The largest deployment of Agent Orange was “Operation: Ranch Hand”. It ran until 1971. A common issue (which some claim The US Government was well aware of), is that Agent Orange is highly dangerous to come into contact with. It has been established (in the 1980s), that over 150,000 Veterans who came into contact with The Agent, contracted a broad spectrum of disease illness. Only recently had The Government started to accept responsibilities. Unfortunately, most Claimants are deceased. It is estimated that over 4 Million Enemy and American Personnel were affected by Agent Orange, with 1 Million casualties speculated. Agent Orange is not considered a violation of NATO, and can still be found in some Countries Military Inventories,  even today. 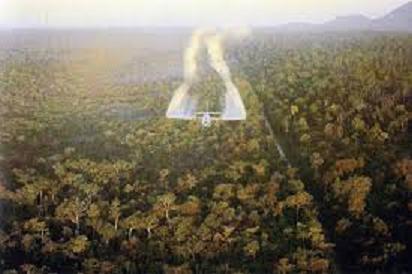