Aedes were specific types of structures, used as Shrines for worship of The Gods, Goddesses and Ancestors of Ancient Rome. They were built by the literal thousands in Rome and it's far flung Provinces. The common feature among Aedes, were their rounded and cylindrical shaped.  It was joked that their were an equal amount of Shrines and Taverns in Rome! Built for Public usage, Aedes were strategically placed throughout The City and dedicated to specific Gods and Goddesses. In most cases they were open day and night for the acceptance of offerings. Built and administered by a group of Government Official known as Aedillis, it was their function to maintain them.

Designed circular with a central rounded inner chamber, the structure was mounted on a circular, multi-leveled series of platforms. They featured a rounded cone-like roof (although some had rarer squared or triangular ones. They wete built of either Granite or Marble. More Common ones were of the cheaper stone, with Marble being used in Wealthier neighborhoods (who generated more money). Much as today, "donations of monies were placed in wooden boxes" inside The Aedes. These funds were supposed to go towards the maintenance of the structure. Most times, it went into the "pockets" of corrupt Aedillis! When Rome abandoned Paganism and became exclusively Christian, many Aedes were torn down, with their stone being used to built new Churches. Some were lucky enough to survive into the Modern Era (thanks to many Centuries of renovation and restoration). 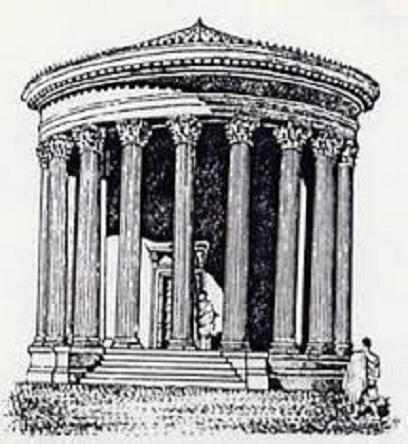