The only Englishman ever to be elected as Pope of The Catholic Church, Nicholas Breakspear was born in 1100 A.D. Joining the “religious life” at an early age, Nicholas served in Avingon, France. His ability at administration quickly set in motion his promotion to Abbot. In 1149, he was elevated to Cardinal of Albano. His first role in this position was to reorganize The Scandinavian Church. He is given full credit for establishing The Church of Norway. Chosen to succeed Pope Anastasius IV, he took the name Adrian IV. As Pope, Adrian's first responsibility was to quell the civil war that was on-going in Rome at the time. With a standing Army, Adrian simply announced that no more Sacraments would be performed. The civil war immediately ended. Responsible for crowning Frederick I Barbarossa as Holy Roman Emperor, the two would spend the rest of their relationship together at bitter odds. Frederick wanted more power in Imperial territories with regards to selection of Clergy (Adrian stated it was the Churches responsibility, not his). Adrian made sure that The Emperor had little or no power in Rome as a result. Also one of the first Pope's to have his biography commissioned in his lifetime, the volume is a good example of the bureaucratic morass that The Catholic Church had gotten itself into by the 13th Century. Adrian IV would die in 1159 A.D. His effective block on Frederick I would continue for another 18 years after his death. 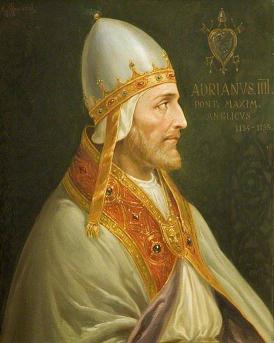