Born in England (unknown date), Baldridge was an early “Founder” of the Island of Madagascar, Africa. Involved in a fight (which led to murder) – in Jamaica (Caribbean), he fled for the far flung land (1684). Considered a “land locked” Pirate, he established his base of operations on St. Mary's Island (off of the main Island of Madagascar). Controlling all water access into both St. Mary's and the principle Port of Madagascar (with a small sea borne Fleet supported by “ground forces”), Baldbridge charged a “fee” for not only protecting the Island warehouses – but maintaining control of the two local warring Tribes (who may or may not have been on his payroll all along!).

In the 1690s, word spread among “Sea Going” Pirates – that Baldbridge was an excellent “fence” for loot. Although a “high fee” was attached – one could not complain. Baldbridge did very well for himself. He opened many Taverns and Brothels to capitalize on his “Clients” wealth. In 1696, Baldbridge ventured into The Slave Trade. He began to kidnap his local Native “assistants” and sell them into servitude. Word spread to both the local Chieftains, who promptly declared “war”. After 1697, Adam Baldbridge disappeared from his “Pirate Heaven”. Many stories of his life after include being killed and making his way to the American Colonies. 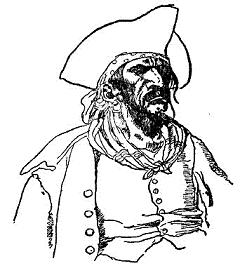