These were early Roman Light Infantry. They were the "5th Class", or poorest of society. They could afford very little equipment. They did not wear protective armor and occasionally carried a shield (often very cheaply made). They form the 3rd Line of Battle in a Roman formation. They did not form any specific formation, and often stood their ground loosely. They were earlier forms of skirmishers. In some documented cases, they carried Javelins and Slings (with some success). They would be replaced (for obvious reasons), in the 2nd Century B.C. by Roman Velites (a similar class of poor soldier, but better equipped). 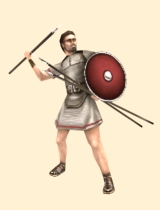