Although it's exact origin is unclear, The Ottoman Empire is credited with the invention of The Abus Gun. Innovative in it's design in that the weapon resembled closely the types of carriage weapons seen in World War I. Mounted on a tripod of 3 mounting stakes, the weapon required only 2 men to operate. Similar in design to modern Bazooka Rocket weapons, they could fire lead or stone shot. Breech loaded, they were fired by slow-match or a flintlock firing mechanism. Shot was around 4 to 5-pounds in weight. Documented Chinese versions of Abus Guns showed them mounted on gradient gun carriages. Their innovations were that the barrels were mounted with elevating gradients which could lower or raise elevation easily. The design was duplicated in the 17th Century with the English Plunket Gun and later with several Napoleonic weapons. 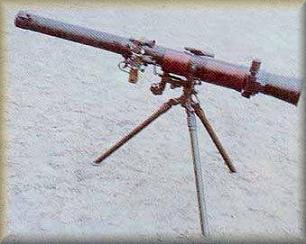