The term ''Above The Salt'', was a mid to late Medieval Food Custom. As we have seen, Medieval Food Preparation involved many different practices – which greatly varied by Region. When the mineral Salt was discovered as a possible food preservative and seasoning, it became a unique and very expensive commodity. As such, it would only be found on the table of Royalty or Nobility. Again as shown, One being invited to dine at such a table was considered a great honor. One would well be welcoming such a ''treat'', as Kings and Queens were ''known'' for their ''tables''.

In terms of the seasoning Salt, unlike today – when the mineral is finely ground (pulverized and packaged), Salt then was coarse and slightly larger in size. Depending on the meal, the portion of Salt would melt into food (hot soups, meats etc). Additionally, Salt was simply poured onto a table – often arranged in a ''pleasing shape'' (such as a Circle or Heart, etc). In form, such would be readily available to the reach (arm length) of The ''Founder of The Feast'' (King or Queen). The Royalty would always be seated to the Front of a Table. So too was His or Her ''Salt''.

Conversely, all ''chosen'' Dignitaries, Nobility and important Visitors, would be seated close to The King or Queen, and likewise have access to The Salt. While lessor Visitors, seated in the Middle or End of The Table, would have to rise and go to the location of The salt at The Table. Ergo, if One was ''Above The Salt'', their seat was seen as privileged. In later Centuries, the now antiquated term denoted a Person who was ''above others'' (either through stature or Class). 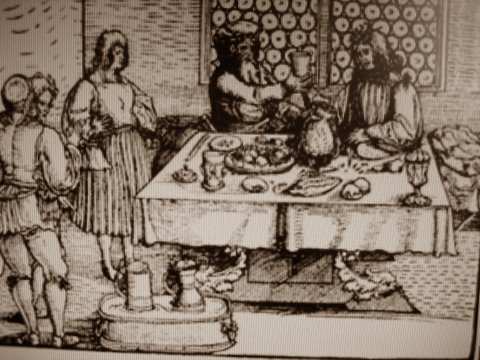