Seconded perhaps only by “Romeo and Juliet”, this Medieval “love story”, is probably the most famous and well known to historians (more so because they were real people). These two peoples story is as such. Peter Abelard (born 1079), was a noted Scholar is Paris. He would eventually help found several Universities in Paris as well. Heloise was the daughter of Nobility (and Church Hierarchy ran in her immediate family). Due to her families wealth, Heloise had more opportunities for education than most women of her Era. Being quite intelligent, she was sent ot The University of Notre Dame.

Abelard (coming highly recommended as “the Best” in terms of his teaching – was hired to tutor her. 20 years her senior, nonetheless – the two fell in love. Due to their “Stations in life”, the two could not let their love affair be known. They met in secret. However, the “fruit” of their love soon appeared with Heloise – pregnant. Enraged, her Father hired to men to beat and castrate Abelard. When Heloise gave birth to their child, it was taken away to be raised by her sister.

The child would grow to be a Canon in the local Cathedral. Brokenhearted (among other things), Abelard was disgraced. He lost his teaching position and sought refuge with The Benedictine Monks of St. Denis. Heloise, (the same) – left all plans for a “proper marriage” and entered the Covent at Argenteuil. Historians have discovered a plethora of letters supposedly written and sent between the two. They still communicated with each other (and still espoused their love for one another for many years – despite their “vows”). Some historians disagree, saying that either one may have written the letters “to themselves” as a form of “self-healing”.

Some have also put forth the idea that this “love story” (widely told during The Middle Ages) – may have even inspired William Shakespeare in his writing of the two “star crossed lovers” - Romeo and Juliet. Their story will even cross the Atlantic with regards to Colonial Patriot (and future US President John Adams. Both he and his wife Abigail – were both “classically educated”. They mention the story several times in their own very well known “love letters”. Their letters number almost as many as Abelard and Heloise (and were just as passionate). The both died at the age of 63 years. They were buried together in Pere Lachaise Cemetery in Paris. 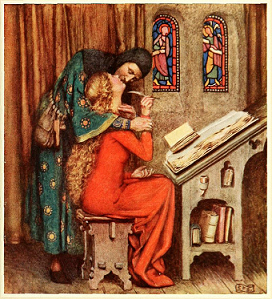