Commissioned under the Reign of Charlemagne in 796 A.D. - The First Emperor was also buried their in 814. Considered the oldest Cathedral in Northern Europe (Germany), Aachen served as the coronation site for 30 Kings and 11 Queens. The Cathedral was damaged in a 881 A.D. Viking raid. Repaired, Aachen would become a major stop for Gothic Period Pilgrims (13th Century). The exterior of Aachen has influences from Carolingian, Romanesque and Ottoman styles.

The inner Dome is encircled by 16-stone walls and is meant to resemble The Alps Mountain Range. The Imperial Throne (Holy Roman Empire is adjacent to The High Altar). This is flanked by massive “Barrel” Arches from which natural lighting is afforded by many narrow diagonal slits in the roof. Ancient Roman columns were also incorporated into the Throne Room Chamber, but these were taken by Napoleon during his 1794 occupation. Marble is the predominate covering for most of the interiors walls, with separate brass reliefs of religious carvings.

Bronze railings (said to have been cast 1,200 years ago in Rome), still function to provide safety from the Upper and Lower interior Tiers. The Interior of Aachen house an impressive collection of Religious Art. It also houses 4 Holy Relics (Mary's Cloak, Christ's swaddling cloth, St. John The Baptist's Beheading Cloth and Christ's loincloth).As per a 1349 custom, Aachen's Relics are displayed every 7 years. 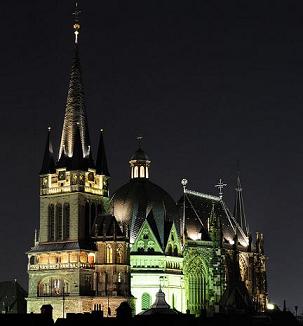