''A General History of Pyrates''

Considered one of the earliest known contemporary literary sources dealing with Pirates and Piracy, “A General History of Pyrates” was written in 1724. It's “Authorship” has been debated for centuries. Accredited to one “Captain” Charles Johnson, “he” has long been considered a pseudonym (with the actual Writer unknown). The book was published in 2-volumes. Long known for it's excellent woodblock image imprints of famous Pirates, these have served in some cases as the only “visual” representations of early “famous” Buccaneers. As far as accuracy, the book does have it's “detractors”. Many historians debate that the “facts” written were taken from 2nd and 3rd person “stories” and “tall tales” - heard in hundreds of Inns and Taverns from ”Old Salts”. The few provable facts were confirmed from Admiralty Court records. Still, in publication (in a single large volume) – the book is (despite it's “nay sayers” - is an excellent example of the “Golden Age” of Piracy). 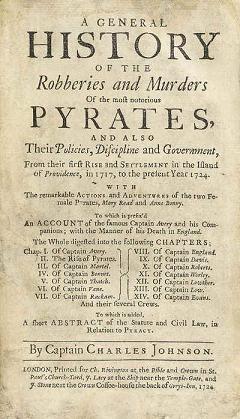