“74s” were a classification of Naval vessels developed in France around the mid-1740s. Displaced at 2,000 tons, these warships were considered the top of Naval Warfare. They could be either of the 2 or 3-Deck design. Normally, lower caliber artillery were positioned on the Upper Decks, with the larger and more destructive guns placed on the Lower Decks. Other Nations adopted the “74” design (with slight modifications (depending on The Nation). A major drawback was the massive amounts of funds required (and time), to construct one of these “Superships”. Normally, a “74” could hold 500 to 700 fighting men. As mentioned, they held a minimum of 74-guns. They were almost always 4 Masted vessels, required vast amounts of sail for movement of these giant ships. Spain and England were major builders of these class of warships. The last “74” to survive (in part), was the French ship “Duguay-Trouin”. She was scuttled in 1949. 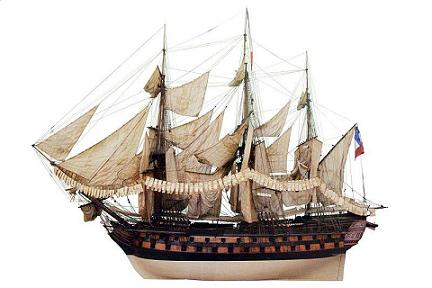