Considered the oldest Active Duty US Army Unit (continuous), The Troop of Cavalry, City of Philadelphia was formed as a Militia in 1774 – of ''Gentlemen of The City of Philadelphia, Pennsylvania''. At the start of The Revolutionary War with Great Britain in 1776, The Troop was re-designated as The 1st Philadelphia Continental Light Dragoons (one of The Continental's first such Units). They fought in (7) major engagements of That War.

During The American Civil War of 1861-1865, as designated as The 1st Pennsylvania Cavalry Regiment, They would fight in (17) battles, to include the first engagement at Manassas (Virginia) and the last (Appomattox Court House). The Troop would continue it's service in The Spanish-American War of the 1890s, and later throughout America's involvement in World Wars I and II. As an Active Duty component of The Pennsylvania National Guard, The Troop (which is assigned as a detachment to The 104th Cavalry) has also participated in The Global War of Terror.

The Troop is very unique among Units in The Army. They are primarily a Ceremonial Force, that dresses in 18th Century Dragoon Uniforms and performs for State and Foreign Dignitaries (Honor Guard). They are made up of both a Dragoon and Lancer Detachment as well as a Military Band. In addition, The Troop is made up of mostly retired Officers of all Branches of The US Military (although some Enlisted and Non-Commissioned Officers are part as well). The Troop takes no pay pay from The US Government for their Ceremonial services and fund themselves to support their Uniforms, Horses and equipment. 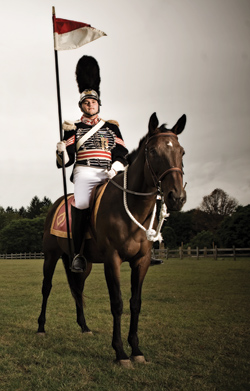