Known as The “Black Devils” The 1st Special Service Force was a composite Elite Infantry Unit, composed of Canadian and American Infantry – which served during World War II. They are credited as being one of the several Elite Units of World War II responsible for the Modern development of Special Operations Units such as The US Special Forces, US Army Rangers, US Navy SEALS (among others).

Raised in 1942 and trained in the desolate mountains of The American State of Colorado, The 1st Special Services Force was derived from the early victories of The British Commando Service. It was seen that the need for unconventional warfare against The Axis Powers would be needed. The formation of a joint Covert/Overt Unit met with some resistance in both The American and Canadian Army High Commands.

Once formed however, The Force (of whose existence was kept at “Secret” Levels) received an almost non-stop onslaught of specialized training. Soldiers who were selected were of course Infantry and related Combat Arms, but none had any training outside of Infantry Basic. Parachuting, Mountaineering, Hand To Hand Combat and Demolitions were stressed. Training continued for 18-hours a day to get The Unit up to specified needs. Equipped as “Regular” Infantry Soldiers, The 1st Force wore a Red Arrowhead Patch with the simple wording in White of “USA” and “Canada” placed inside The Device. In addition, The Unit wore bright Red Berets.

The 1st Force received their somewhat ominous nickname “The Devil’s Brigade” from their first encounter with German Soldiers in Italy. Climbing straight up an almost “impossible” mountain cliff at night in complete silence, The Force was tasked with the destruction of a German Heavy Artillery Position. Attacking and slaughtering The Command, Force Members placed small cards printed in German with the phrase “The Worst Is Yet To Come” – with an image of The Unit Patch – on the bodies of dead German Soldiers. Seen as “Black Devil Shadows” who struck and disappeared without warning, The 1st Force became known as The “Devil’s Brigade”. This was among the first uses of extreme psychological warfare (or “Death Cards”) used in World War II (and beyond). This practice was very effective against The Germans.

Distinguishing themselves at The Invasion of Anzio (1944) The 1st Force also fought behind Enemy Lines in France. They were credited with inflicting over 12,000 German casualties in their Operations. As effective as The 1st Special Force was, their continued used in covert Operations were quickly overshadowed by the massive influx of Allied Forces into Europe as a result of The Normandy Invasion. Allied Command decided to disband The 1st Force towards the end of 1944, with most survivors of The Unit being absorbed into Airborne, Ranger and Commando Units in both The American and Canadian/British Army. Over 1,400 Soldiers from both Countries had once served in The 1st Force. Largely unrecognized by History for their achievements – it was not until 2013 that The US Congress award The Congressional Gold Medal to The Force for their actions in World War II. 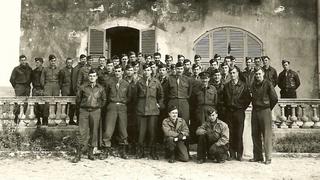