Pirates, as we have seen - were Masters in The Art of Torture. This was seen as a preferred method of extracting information, rather that seriously damaging a ship (and a potential prize). It was well known Ship Captain's hid much of their gold and silver inside the hull and other "secreted" portions of the Ship. Often only he and several Officers would know the whereabouts. Pirates knew this too. Therefore certain "methods" were developed to illicit information, as well as "make a point". Woolding was such a method. Some say the practice originated with Danish Ships, others Spanish. Regardless, the practice involved wrapping a stout rope around the neck or forehead. A knot was tied to create a "pressure point". As the victim was bound (often to a Mast or Yardarm), he could not move. The rope was slowly twisted, cause blood to be forced into the head. Also, the victim might be forced to "squat" or produce some other kind of position designed to increase pressure. Blood pours from the eyes, nose, neck and mouth. Still no knowledge of where the gold is hidden?  No matter, a violent thrust backwards will "pop" out both your eyes!. Maybe at this point, The Pirates will shoot or "run you through". At any rate, Woolding was done with a captive audience of fellow crewman/prisoners. Perhaps the next one will talk......... 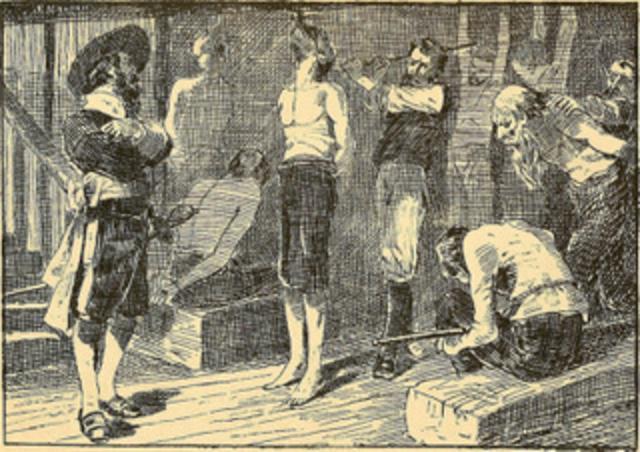