''The Vampire of Hanover'' (Fritz Haarmann)

Yet another real Monster and vampire was one Fritz Haarmann. Dubbed The Butcher of Hanover and ''The Vampire of Hanover'', Fritz liked to bite the necks of his victims (often tearing open their throats and drinking heir blood). He has also been known as The Wolfman of Hanover. Coming from a large family (9 children), Fritz was a middle child, and stated he received no love or support from his parents. His father was short-tempered and argumentative. He may also have been a wife beater. Fritz grew up hating his father. Fritz was not a social child and was described as effeminate (preferring to engage in traditional female hobbies and chores). In School, however  Fritz was smart and learned his schoolwork exceptionally well. It was said by Fritz that he had been molested by one of his teachers. This caused him to withdraw from the good grades he was known to get. He left school at 15, wishing to go to work.

Despite being effeminate, Fritz grew up into a tall and strong man. Serving in the military briefly, he was relieved of duty due to epilepsy. Around this time, Fritz attempted his first sex crime - trying to rape a girl. He was caught and convicted, but Doctors testified that he suffered from a mental disorder and could not be held responsible. The testimony worked, with Fritz being sent to a Mental Institution for observation. Released (conditionally), his mother helped him to escape to Switzerland. Once again, Fritz entered Swiss military service (as did very well as a soldier). However, his epilepsy reared his head and he was discharged one again. Fritz stated much later that all he wanted to be was a soldier. Receiving a medical pension from The Swiss, Fritz became a Fishmonger. He was accused of burglary and larceny on several occasions (but no concrete evidence linking him could be found). Between 1918 and 1924, Fritz engaged in his (now declared) homosexual lifestyle (considered a felony in Germany if caught). Fritz had to live beneath the radar as it were. Frustrated, this and his other failures in life  may have led him to his first murders.

Targeting young men between 10 and 22, Fritz would lure these victims back to his house with promises of helping them find work and a place to live (Germany was in the throes of Post World War I restrictions). Many men had no jobs or places to live. Upon getting his victims back to his home, he would attack them biting through their necks (partially eating the meat and drinking their blood). Fritz would them dismember them and either bury them or throw them into different rivers and streams. It is estimated that Fritz killed 27 men and boys this way (although he stated the figures were higher  50 to 70). Police had an epidemic on their hands. But by 1924, Fritz had gotten sloppy. Leaving critical evidence at one of his dumps, Police were able to trace it back to his home. Their more evidence of his grisly acts were found (including bones and instruments for dismemberment). When Fritz was arrested he freely admitted his crimes. Tried and convicted for the 27 known deaths  Fritz Haarmann was executed (by Guillotine), in April 1925. 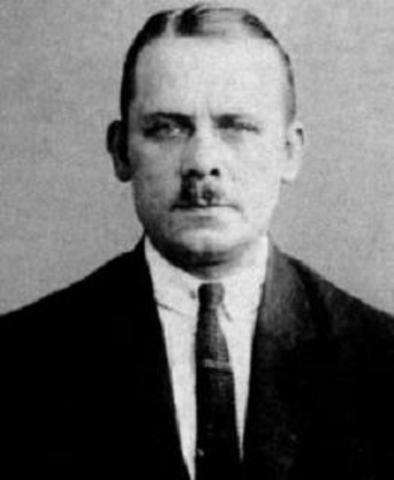