The USS Trepang was a Sturgeon-Class, attack Submarine. As part of America's Cold War Fleet , Trepang was also used to spy on Soviet Russian military activity in The Arctic Ocean. In March, 1971 - Trepang was just days away from completing it's first mission in The Arctic Ocean (operating around Norway and Iceland. Preparing to surface, she raised her Periscope to survey the surface. The Captain saw something that he was not expecting to see. He observed what appeared to be 3 objects hovering between 100 and 200 feet above the surface. These objects were unaware of the Submarines presence. The Captain noted that one of the Object's (a cylindrical-shaped craft), appeared to be in distress , with smoke and what appeared to be flames coming from it's center .

This Object suddenly dipped and began to fall into the Sea. The other 2 Objects soon dived into the water as well. The Trepang conducted a sonar sweep of the area, but registered nothing. The Captain allegedly recorded the Objects with the Periscopes recording equipment. The film was tuned over to The US Navy for review. Their release was by an accident of The Public Information Act in the 1990s. The original stills of the film were clearly marked SECRET and NOT FOR PUBLICATION . When questioned, The NAVY stated that the film was a hoax and that they had no reports concerning Trepang being involved in such an incident. It is known (and documented) that Trepang WAS operating in that area that day and time. (Hmmmmm........) 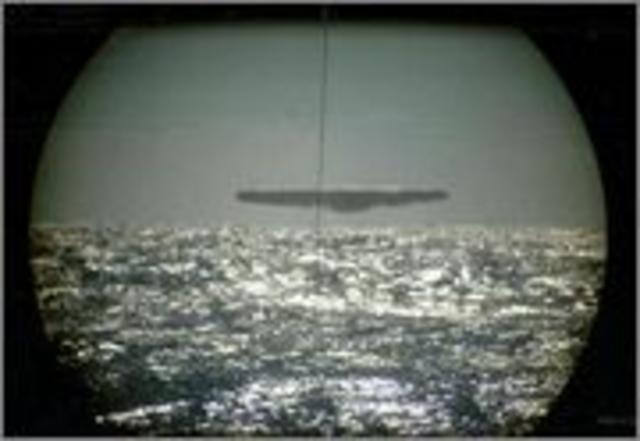