''Red Ghost'' is an ''old'' Tale – dating back to 1883 and The American West. The story is linked to a period in American History when Camels were seriously considered for service with The US Cavalry. For ''desert work'', the animals were seen as especially hearty – eve more so than Horses. In fact, since their inception in the 1850s, a ''Camel Corps.'' was actually created. But the overall and often intensive care needed for the animals would end their overall service early in The American Civil War (1861-1865). But it was in Arizona (US), that the tale of ''Red Ghost'' developed. According to several ''well known'' stories, the exact origins of the ghostly Camel known as Red Ghost is unknown. Even little is known of the often accompanying human skeleton, strapped to a saddle on the ''back'' of the Spectre.

But one account states that Red Ghost (so named for it's red tinged hair), ''attacked'' a Night Camp of Guides in the desert. The ''frightful beast'' overturned wagons and trampled equipment – and was even shot at several times (all amounting to no effect). The ''Human Rider'' – seemed ''lifeless'' with eyewitnesses stating ''it wore no clothes''. With the coming of the ''first lights of dawn'' – The Ghost and Rider ''vanished''. ''Red Ghost'' was reported several times more well into the 1890s – when sightings simply stopped. But in the 1940s, the ''vision of a ghostly camel-like Beast with a skeleton (attached)'' was reported by several Highway Travelers. Some state that The Ghost may be the ''unhappy'' Spirit of of both Rider and Animal who perished alone in the desert, while on Patrol. But The US Military has scant records of The Camel Corps. And little on any soldier or camel ''lost'' on active Duty. 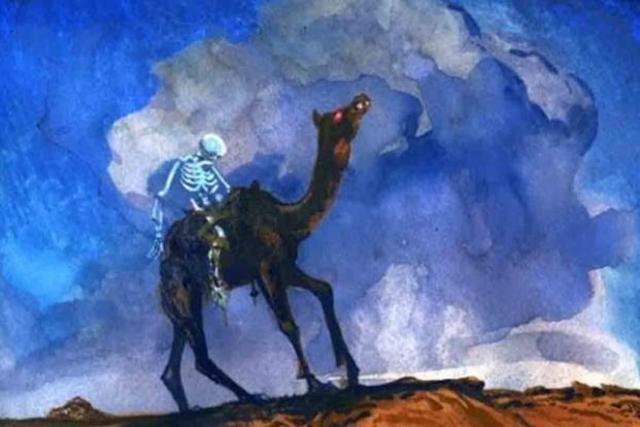