Yet another famous Landing and Contact case, involved a New Mexico Police Officer Lonnie Zamora. Zamora was a New Mexico State Police Officer on routine patrol outside the small Desert community of Socorro. The date was April 24, 1964. Around 6 P.M. - Zamora stated that he was in pursuit of a vehicle speeder, when he heard a roar and saw what appeared to be a flame in the sky . Thinking a Dynamite Shack (common for local Mining and Construction) might have exploded, he broke off his chase to investigate. Approaching an incline in the road, Zamora stated he saw a large bluish flame coming up from behind the incline . It reminded him of a jet exhaust wash . Coming to the top of the incline, Zamora stated he saw what appeared to be an overturned white Truck or other kind of vehicle . It was oval shaped (so he began to think it was an overturned Tanker. He thought it was strange that he could not see axles or wheels . He stopped his car, got out and began to approach the vehicle .

Upon closer look, Zamora notice that the vehicle was an Oval-shaped object, standing on what appeared to be steel legs or struts . He also noted a strange symbol (in Red), over one section of the Object). At this time, Zamora went back to his car and radio his dispatcher to advise. While doing this, Zamora saw what appeared to be 2 people, dressed in some king of all white overall and wearing what appeared to helmets with visors of sorts . Noticing Zamora, the 2 people seemed startled. They went inside the Object. Within second Zamora stated that the previous seen blue flame reappeared under the Object. The Object began to rise off the ground (with the struts disappearing). The Object ascended straight up into the sky. Dumbfounded, Zamora approached the location of the Object. He noticed 3 circular spots burnt into the Desert sand. He took pictures of the marks. The entire case was eventually turned over to The US Government and their now infamous Project: Blue Book. Their conclusion unknown (which was rare for them). 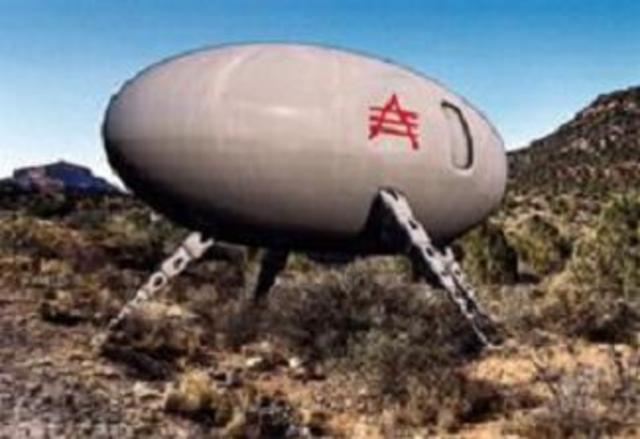