(Author's Note: I guess Alien Life likes me! One again I have another story of a sighting of something that I often describe as AMAZING - more so that it happened to be twice now!)

I was working as a Private Patrol Officer in the City of Pasadena, California in 2003. Having finished my day , it close to 3 A.M. - as I pulled into my Agencies Parking Lot. The Lot was about 500 feet long and 100 feet wide. To the East of The Lot was a huge Oak Tree. To the right a series of Apartment Houses that were about a half-story tall. After closing out my Patrol Vehicle, I would often take a smoke to calm down after Duty. I would lean against my vehicle and just zone out - liking to stare into Space. This particular September night it was unusually clear with a huge Starfield to look at. At exactly 3 A.M. - this Craft (the only word I could think of), flew VERY slow over my head (at about 800 or so feet!). It was HUGE. I would describe at as a Black Triangle Ship. One could just barely make out it's shape (using the Stars it blotted out to formulate shape and size somewhat). It featured 3 Whitish-Red lights on it's front and side wings These lights were pulsating. I just froze (after years of training!).

I watched the Object float overhead (it did not seem to mind if I or ANYONE was watching it). Then suddenly, the Craft flipped upwards so that the longer, bottom portion of The Triangle was inverted down! It quickly flew off in THIS POSITION. I grew up on US Air Force Bases and know EXACTLY how, why and the capabilities of Modern Aircraft. THIS was not one of these. I then remembered to get my camera! (Dummy!) I did however report the sighting to a National UFO Reporting Center, (via telephone). Additionally, the provided photo is an Artist Rendering for visual purposes. It is as close to what I saw as can be found. (What's next For Me, huh? ) 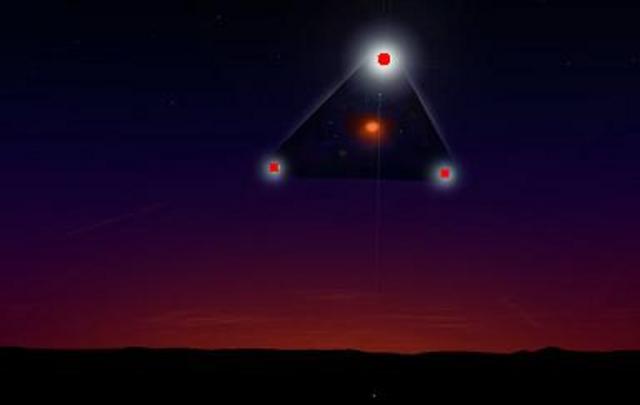