1936 was indeed a strange year for those aboard The Soviet Transport Ship ''Maria''. Steaming through The Pacific Ocean at around 10 in the morning, a Deck Watch reported the sighting of a ''strange, Balloon-like Object'' rising from The Sea. The Object ''glowed'' a ''soft blue hue''. The Object seemed to float on the surface. Making His report to The Captain, He ordered a Skiff with Sailors aboard to investigate. As The Boat approached, The Object took off at great speed, then stopped. Again, The Sailors tried to approach. Each time, the same high speed movement. Soon The Captain grew tired and ordered The Skiff back. The ''Maria'' resumed Her original course. A Half-hour passed, when The Object appeared again, this time cutting off The Ship, and laying directly in it's path. The Object rose us roughly 6-feet. The Crew could see that The Object was transparent. Again The Captain ordered a Skiff back into The Sea. This time however, The Object approached The Skiff at high speed and ''enveloped'' The Boat!. The Crewmen (later) stated that they felt that they were inside a bubble. They could breathe with ease. They did also notice that the interior of The Object seemed much ''larger'' than it appeared to them outside.

The Crewmen stated that inside The Object were ''Creatures, which resembled Giant Frogmen''. They all wore a kind of ''strange black, rubbery suit''. The Creatures had hands that appeared to be Human, but they noticed webbing in between their fingers. The Sailors remained inside The Object for what appeared to be only minutes. In reality, they were gone for 2 days. Throughout the passage of ''normal time'' (outside The Ship), The Captain and Crew tried frantically to find a way to attack The Object to free their fellows. They even fired weapons at The Object, to no avail. On the third Day, (and this part of the tale is not explained) only 1 of the ''abductees'' was released. After taking the Sailor on board (who was in a state of shock according to The ''Maria'' Log), The Object and The Frogmen, sank into The Sea. Upon returning to Russia, a full report was made to Authorities. They, in turn branded all involved as ''psychotic'' and ''insane''. The Crew was confined to a State Hospital for many years it seems. Although the story made the ''rounds'' through many Merchant Ships and Ports in the late 1930s the impending horrors of World War II ''hushed up'' the tale. To date, the Encounter is seen as a ''made-up take'' by ''lax and lazy Sailors and an even more disgraceful Commander''. At least that is the ''Official'' Version...... 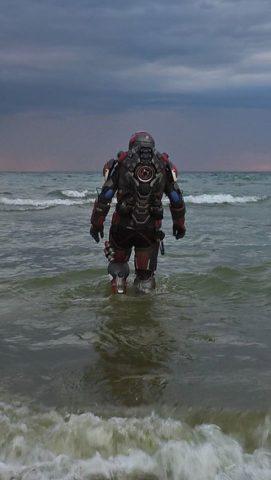