The Legend of The ''Headless Horseman''

A VERY popular American legend (especially around the Halloween Season of October), deals with a short story written by Washington Irving (in 1820). According to legend, it was set during The American Revolutionary War. British Forces regularly employed German Mercenaries (known as Hessians or sometimes Jagers). Born fighters (and having a reputation for ruthlessness), one such Hessian Commander was particularly cruel to any American Colonial he encountered in battle. During The Battle of White Plains (Upstate New York, 1777), this Hessian Commander finally got his ''come upings'' and was killed (beheaded, actually). Many years later, local residents of the nearby Village of Sleepy Hollow found the skeleton and buried it. They however, never found his skull. Next, (as all legends do go), a black spectral horse with a mounted (headless, of course) German soldier, - waving his saber  was seen galloping along the backroads. If one was seen by the ''Headless Horseman'', they had to flee for their lives -  least he caught them and removed their head to replace the one that he had lost! The legend was incorporated in a story dealing with a mild mannered (and cowardly) hero named Ichabod Crane, who in love with the local Village vixen (who happens to also be the love interest of the Village Bully, Bram Bones). Bram notes that our girl (Christina), likes ''smart guys''. So, to remove his rival, Bram dresses up as The Horseman (complete with glowing Jack-O-Lantern), to scare Ichabod away. Unfortunately for Mr. Crane, the real Horseman comes along, with a traditional American unusual ending. 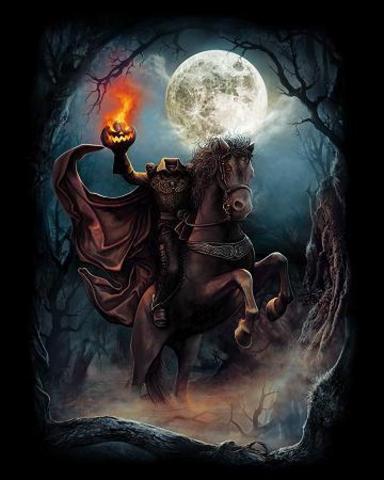