Not known to many – the ‘’exploits’’ of Mr. Boone Helm ''The Kentucky Cannibal''were a quite popular subject in mid-19th Century America. Much of it was ‘’peppered’’ by early Media (Newspaper) sensationalism, but most of the ‘’facts’’ were TRUE. Helm was born in Kentucky (US) around 1828. His Family (rather large), were hard working respectful and ‘’God fearing’’. The Family thru Their labors, amassed quite a fortune. Helm however, was always a ‘’strange and self-centered Child’’. He – for some unknown reason – had an immense hatred towards any form of Authority. Helm became an expert Horseman and Shooter. In His teens, Helms got into ‘’trouble’’ and after arrest for a charge, ‘’terrorized’’ The Judge in His Case. In most cases against Helm, His Father ‘’bailed Him out’’ or simply ‘’bought off’’ Witnesses (to spare The family any more embarrassment).

Helm would marry a 17-year old local Girl in the early 1850s. He by this time, was a ‘’hard drinking, gambling troublemaker’’. He regularly beat His Wife and started fights in Town. Helm’s Wife petitioned for a Divorce and of course, Helm’s Father ‘’paid for everything’’. Helm would leave Kentucky, after nearly bankrupting His Father, and headed for California. He made a name for Himself as a ‘’Frontier Guide’’ for Settlers and Expeditions. But Helm also liked (if thought He was working with ‘’weak people’’), take advantage of Them, often leaving Them to Their own poor skills, by abandoning Them in The Wilderness.

Helm’s infamy as a ‘’Human Cannibal’’ began in the early 1860s. While on an Expedition with 5 others (one a Cousin), They encountered a Native American War Party. Chased into the high mountains, They quickly hunkered down and ran short of provisions. According to Helm’s later testimony, it was His ‘’friends’’ who turned on Him, driven to the thought of ‘’eating Him’’ rather than starve when the provisions ran out. Helm was smarter, and killed all of Them save one. The two Men agreed that They would ‘’eat’’ Their former Friends. The Men cut off a Victims Legs and wrapped them for ‘’later’’. The pair began to move from Their defensive position and towards ‘’civilization’’.

In Town, Helm bragged on His ‘’dinner choices’’ when drunk at a Saloon. Arrested, it was His older Brother from Texas that ‘’paid off’’ Court Officials so that the Family name would not be associated with such a ‘’heinous crime’’. He was spared ‘’The Rope’’ but sent to a Mental Asylum. Helm didn’t intend to stay long. He made friends with a Guard, who – believing Him ‘’rehabilitated’’, allowed Him to go on walks in The Sanitorium Gardens. Helm overpowered The Guard and escaped. He went to Montana Territory and lived as both a Gunfighter and Gambler.

But it was the rise in ‘’missing persons’’ that caused some alarm with the population of Virginia City, Montana. This would later be explained that helm developed a ‘’taste’’ for Human flesh and on occasion – would ‘’hunt, kill and prepare’’ His new habit for food! It would not be until 1864, that Helm would finally ‘’see justice’’. Having joined a local Robbery Gang, He would be captured and jailed. Sentenced to hang, He regularly derided The Guards and Police with His ‘’cannibalistic taunts’’. When the time came for Helm to be hung, He reportedly jumped off the wooden box He was placed on (to be kicked away by The Hangman) – wishing to deprive The Law of the ‘’pleasure of His death’’. It is estimated that Boone Helm may have killed and eaten (11) People, but the number may well be more. 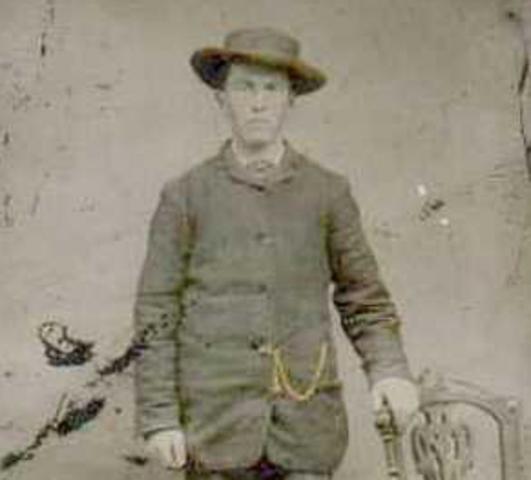