British Graphic Designer and Artist Stuart Humphryes has made quite a name for Himself. In addition to His work on British Television, He also invented a high tech design program to enhance a process known as ‘’Colorization’’. The Process, which started in the late 1980s, took Black and White Photographs and Films, and ‘’made them color’’. Early examples however – seemed somewhat ‘’washed’’ and as such – the Genre was definitely a case of ‘’hit or miss’’. But Humphryes Process actually creates VERY realistic color hues. As such genuine pictures from by gone Eras (and taken in Black and White), can now ‘’appear’’ as if Color was used instead. Which lead us to an example of His work, first published in 2018. The Black and White Photo depicts a ‘’Beach Holiday’’ involving Residents of The Cornish Coast of England – circa 1943. Very clear, most Residents are going about what One would imagine at an English Beach – that is save One curious Gentleman.

Seen in the center of the photograph, He appears dressed in ‘’Period Clothing’’. No One near seems to be noticing Him. But the Man’s body position and pose suggests that He is ‘’using a Cell Phone’’. Yes, you read that correctly. The Man is using a piece of 21st Century Technology that SHOULD NOT  EXIST. Many latched on to the fact that this was yest another example of a ‘’Time Traveler’’ caught by accident on film or photograph. However, detractors state that when ‘’enlarged’’, The Man is ‘’rolling a cigarette’’. But regardless of the magnification, this conclusion does not really hold either. Humphryes was just as amazed as anyone, but His abilities as a Graphic artist is called into question. Could the 1943 photograph be nothing more that an example of Modern Paredolia? Or Could it be that elusive proof of Time Travel? 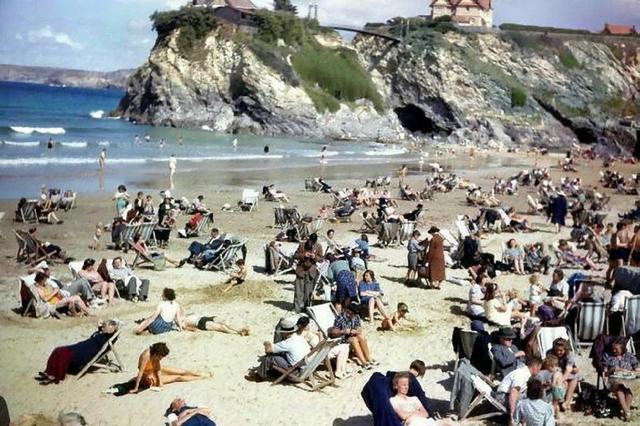