As we have previously read here, The Earth's Moon is a place which has held Man's imagination and curiosity for many Eons. Some Ancient Culture's worshiped The Satellite, while other speculated that it held Life. By the 1960s, much of these legends were debunked – when Earth sent it's first Explorers to The Moon in 1969. after a series of very successful and profitable Moon Expeditions and Landings, Humankind simply stopped going. This abrupt action caused many Theorists to speculate that ''We'' were ''told'' to NOT return (by Extraterrestrials it seems). Again, we have read of the many sightings by Astronauts (on The Moon), of ''strange Objects'' and unexplained ''Light Flashes''. Going ''deeper into The Rabbit Hole, we hear of stories about mysterious Alien Cities (and artifacts) lurking on what Earth calls The ''Darkside of The Moon''.

Finally, the tales center around an ultra-secret Mission to The Moon (despite our ''warning''), to investigate a crashed Alien Spacecraft. To finish this tale, it was said that an Alien in suspended animation was retrieved and brought back to Earth (revived and apparently still living among us). To be sure, the stories grow and grow. It is into this that another odd theory has been advance. This is, that The Moon is in reality hollow and – as it is told, is actually a long ago built Alien Spacecraft cleverly disguised to resemble a Satellite. The purpose, to monitor and observe Life on this Planet by – what some think, are ''Those'' who placed it here to begin with. The ''Hollow Moon'' Theory is NOT new. As early as the 17th Century AD, early Astronomers have deduced that The Moon does not behave as other similar Satellites do. It's very positioning and orbit is not normal either. And while Science disproves this, it also cannot explain it. Most commonly held, is that The Moon ''came'' from The Earth, billions of years ag0 – in a cataclysmic gravitational side-show which ripped a molten mass from The Earth and held it into place. Cooling over the Eons, it would become the prime cause for out tidal and seasonal measurements. Indeed, without a Moon, The Earth would be a VERY different place.

But then comes the mysterious Culture known as The Assyrians (and others it seems). They tell another ancient tale which is worth some note. Eons ago, a ''Serpentine-Humanoid'' Species came to Earth. The Earth (as a Planet), was said to be a VERY different place. According to legend, The Earth had a mantle of water vapor encircling it. This called a continual ''fine mist'' to be ever constant. The Planet was covered in rich and green foliage (Paradise?) The legend states that The ''God-like'' Race came to Earth in a massive ''sphere'', which became locked into Earth's gravitational pull. The result......a cataclysmic event in which the mist-like atmosphere became unstable, casing it to ''fall to Earth''......(The Flood or Great Deluge?) Although ''Earth changing'', this ''Sphere'' would come to regulate tidal forces and what would become the seasonal changes needed for agriculture (or so The Legend goes). The Race (for whatever reason being unable to break free of Orbit), either left it, or simply took up residence. This legend would spur many early Astronomers and their beliefs in a ''Hollow Moon''.

In time, Writers would also speculate, adding their own takes on the subject. Most people gave such theories no credence until HG Wells published ''First Men in The Moon'' – lending much to great ''hollow cavern with great underground cities and of course ''Moon Men''. This would be dismissed however with early Earth Probes and of course NASA's Apollo Missions. But even in this, some things could not be explained by simple Science. Past Articles tell us of the Classified photos and observations by Astronauts of ''strange and unexplained ''Lights and structures'' which were apparently ''seen''. Coupled with two other unexplained phenomenon....that of ''Moonquakes'' (Lunar Seismic Activity) and the fact that The Moon ''rings'' hollow. The ''ringing'' Theory comes from several observations (during Expeditions), which show that when an Object strikes the Lunar Surface, the surface will ring as if sounding as a Bell (or in other words, being hollow). The effect lasts hours it seems. Moonquakes are even more puzzling, as the Moon has no such related geology to explain ''where and how'' they occur. Perhaps, as the Theory of some goes, the Quakes are the result of machinery.......buried deep within a Hollow environment.

One of the more interesting theories come from 1970s Russia, in which was postulated that the very craters on The Moon are not consistent with a strike by Space debris. The majority of craters are more flat that deep, and the dispelled energy from impact spreads outward (forming the crater edges) – is not consistent either. It was speculated that this effect would exist if a force were to hit a ''solid Hull'' however, thus absorbing all energy. Some say that this was excepted and actually engineered by our strange ''Serpent People'', attracting such debris to help cover and conceal their ''Ship''. Whatever you believe or don't, The ''Hollow Moon'' Theory seems to be a component of Culture and will so remain, until positive proof exists, on way or another providing that ''We'' are allowed to discover it. 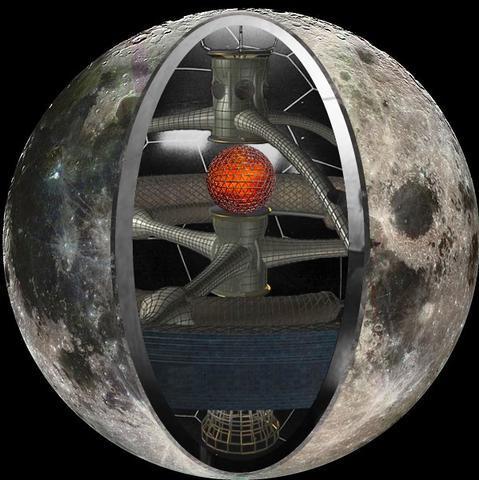