The ''Hiding Statue'' of Graceland Cemetery

While much of this ‘’Tale’’ is Urban Legend, with absolutely NO photographic proof otherwise – the Story of Inez Clarke is nonetheless – well, creepy – IF IT'S TRUE. Located in Graceland Cemetery in Chicago, Illinois is a rather strange piece of Funerary Statuary. The age of the Cemetery, going back to the 1850s – means it is chock full of such finely crafted pieces. They harken back to an Era when ‘’Respect and Honor’’ for The Dead was greatly sought after. The Statue which overshadows the Grave of Little Inez, was placed their in the 1860s. She was reputedly struck and killed by lightning during a thunderstorm. Her Family installed the Art as a Memorial. But it seems that EVERY time a lightning storm passes thru, Inez’s Statute vanishes. It was commonly told by Locals that when the storm stopped, Her statue would ‘’return’’ – as if hiding from the disaster that took Her Life, IN DEATH. The Tale became so common that in the 1890s, a glass enclosure was erected to STOP the Statue from ‘’moving’’.  Actually done by the Cemetery in the 1930s and regularly maintained by Them (as a means to preserve the craftsmanship). There have been no recent reports of the Statue ‘’seeking shelter’’ during a storm, but then again – WHO be out in a thunderstorm in a dark Cemetery to confirm it? 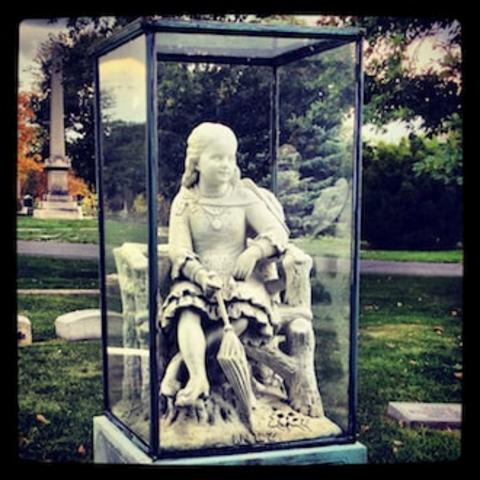