Located in Los Angeles, California (US)  - The ''Knickerbocker Hotel'' first opened in 1929 and was an early popular spot for Hollywood’s Elite.  Of Spanish style, it boasts a $120,000 chandelier and elegant rooms. But as We have seen with ‘’other’’ LA Hotels from that Era, most are remembered for Their tragedies – and ultimately…..Their Ghosts. The Knickerbocker saw many well known Stars live within it’s walls. Elvis lived their during filming of His first film, Marylin Monroe honeymooned their with Her baseball Legend Husband, Joe Dimaggio and DW Griffin, the famous Director stayed long term when He was filming in and around Los Angeles. In fact, it was at The Knickerboxker, Griffin suffered His fatal stroke. Rushed to an area Hospital, He would die several days later. The Hotel has seen it’s share of insanity and suicide. Several Starlets from Hollywood’s past went insane staying Their (for reasons still unknown). One such even committed suicide by leaping from it’s roof to Her death. But perhaps the most unusual, is The Knickerbockers ‘’association’’ with famed Magician and escape Artist – Harry Houdini.

Houdini had stayed at The Hotel several times. He often commented on it to His wife, Bess. It is well known that Houdini was a professional ‘’Ghost Buster’’, often pointing out fake paranormal events and Mediums. He often said that WHEN He died, IF an ‘’Afterlife’’ existed, He would ‘’reach out’’ to Bess as ‘’legitimate proof’’. As such, every anniversary of Houdini’s passing, Bess traveled to The Knickerbocker (October 31st), with invited Guests, to hold a Séance (hoping for a response from ‘’Him’’). Every year for 10 years this ‘’event’’ was held (and every year The Seane failed).

But in 1936 (the last time), a very strange phenomenon happened. The 30-odd Guests were visiting on an outside veranda, when a terrible rain storm erupted OVER The Hotel. In fact, the ‘’freak’’ storm ONLY fell on the Knickerbocker and the surrounding block. No rain fell anywhere else in The City. The event lasted for several minutes….then stopped. Within minutes, the water began to completely dry up. A freak weather rain cell? Perhaps….or maybe Harry Houdini really did ‘’send a message’’ to His adored Wife, Bess. The Knickerbocker still experiences the occasional strangeness. Cold spot that seem to travel down Hallways into elevators, only to dissipate when the car reaches it’s destination are common. Visitors have reported ‘’feeling something’’ pulling blankets and covers either off or onto beds. Still, it is a popular spot…especially for it’s ‘’spectral Guests’’, it seems. 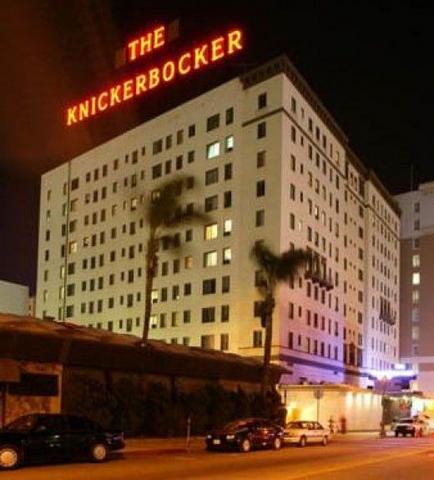