Mary Todd Lincoln was Wife to American President Abraham Lincoln. Lincoln, seen by many as ‘’Savior of The American Union’’ during that internal and bloody strife known as The Civil War (1861-1865), was of humble and simple origins. His Wife however, could not have been as far from Him as possible. With her Family from ‘’Southern stock’’ (and Slave Owners), Mary Todd was fond of extravagant parties and a lifestyle befitting a ‘’Queen’’. Despite His attempts to change Her, Lincoln often ‘’looked the other way’’ with Her often expensive ‘’functions’’. Mary Todd loved Her expensive dresses, often only wearing them once (maybe twice). One in particular, a purple crushed velvet affair sewn for Her in 1861-1862.

In addition to 4 years of bloody War – a tragedy for The Nation, The Lincoln’s too suffered many personal losses. Lincoln and Mary had (4) Sons, of which only one grew to maturity. The other died sadly of illness in The White House. Deeply stricken, Mary turned to Spiritualism and Mediumship for solace. Her purple dress was one of Her favorites during such ‘’Seances’’. After Her Husbands assassination in April of 1865, Mary sunk into a deeper depression. She relied heavily on Seances and often attempted to invoke ‘’paranormal responses’’ regarding Her dead children and husband. Mary Todd was even briefly committed to an Asylum for treatment. She would regain some sensibility but was truly never the same woman. She died in 1882. But Our Story doesn’t stop there. The Smithsonian Institution is a Worldwide known ‘’National Museum’’ which features excellent pieces of American and World History. In the late 1990s, The Institution decided to feature an exhibit of the most popular dresses worn by every Wife of very American President. Of those that survived, Mary Todd’s purple dress was offered for view.

Almost immediately ‘’problems started’’ it seemed. Although ‘’under glass exhibition’, many Security Guards and Staff remarked that They could hear a ‘’muffled moaning and weeping’’ that came from the dress. Further, Guards at Night reported ‘’seeing’’ the ghostly image of an ‘’older woman, wearing the dress – gliding across the floors’’. Her face was described as being in great ‘’distress’’. Most Visitors who stood before the exhibit, felt a feeling of ‘’unease and distress’’ as well. Perhaps the dress ‘’soaked up’’  the energies from many past Seances – peppered with the grief of losing Sons and Husband. Perhaps that energy can still be ‘’felt’’? 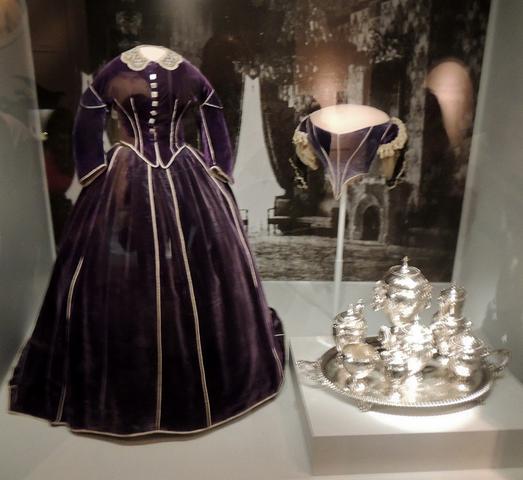