Father William Gill was an Anglican Missionary assigned to the small Bosinai Atoll, Papua, New Guinea. On the evening of June 26, 1959 he and others, witnessed an amazing sight in the skies. Not only did he see a UFO (in great detail), but he was partially contacted by the occupants. The encounter lasted 2 days (the Craft and occupants made 2 appearances). Since April of 1959, strange White and Blue lights had been reported over New Guinea (and The Pacific). Many attributed the lights to US Military traffic (and Nuclear Testing). On June 26, Father Gill and his Villagers had just finished dinner. It was 6 P.M. Walking out to the nearby beach shore, several Villagers started to remark at the strange Bluish Light that appeared to be getting bigger and bigger (as well as CLOSER), to the beach.

Father Gill noticed (as the Light came closer and better into view) that the light was not a Military Aircraft. Amazed at what he was able to see, Father Gill described a Circular Object that appeared to have a translucent top . It was very bright . Further, Father Gill saw 3 leg extensions coming from the bottom of the Craft. It was them that he saw what appeared to be Human Beings waving to him from the top Deck . Father Gill remarked that he waved back in response. Gill also noted the beautiful Blue light , which seemed to come from the Upper Deck and extend into space. The Object traveled fast but did not seem to be in a hurry. The next night (an hour later), a similar (but different) Craft made a similar contact with Father Gill (who was with several Villagers this time). He did not see Beings this time, but experienced a similar encounter as he had previously experienced. Gill had served as a qualified Ground Observer in World War II (England).

He felt he needed to alert Authorities of what he had seen. Jurisdiction rested with The Royal Australian Air Force. Providing a detailed written account (as well as sketches), Father Gill was immediately ridiculed. The Military stated that he had misidentified his sighting. They could not speculate why some 120 Villagers could all tell the same story (without variation or evidence of rehearsal). 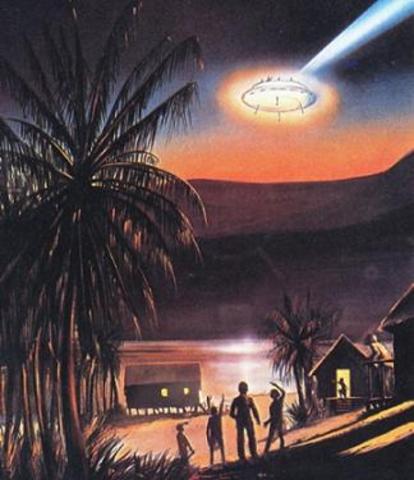