The ''Devil Baby'' of Hull House

This unusual urban legend tells of a cursed child that is said to still lurk (or haunt) Hull House (in Chicago, Illinois/US). According to the legend, Hull House was one of the first experiments in creating a social welfare home for the poor (notably unwed mothers and their children). Founded by Jane Addams, she had spent much time in The Whitechapel District of London helping the poor. In the early 1890s, she purchased the Hotel-like Hull House and had it renovated for use by the poor. According to the rest of the story, one of her first Clients was a poor woman and child. According to her, she was a devout Catholic who fell in love with an Atheist. At the moment of giving birth to his child, she hung a picture of The Virgin Mary over her bed (to comfort her). Her husband tore down the picture and ripped it to shreds saying - ''I'd rather have a child of The Devil, that believe in this!'' When the child was born, it was described as having red skin, small sharp horns, glowing eyes and a tail . It was thought that this was a curse from God. The woman was admitted to the home (although she kept to herself on the upper most floors of Hull House). No one (not even Ms. Addams)  claimed to have ever SEEN the child (face to face). Soon strange and terrifying things began to happen in Hull House. People who spent the night there complained of bad dreams and seeing strange images dancing on the walls. It was said when the mother died (of natural causes), no one found the baby (or a body). It is said that the Devil Baby still haunts Hull House (which is now a Museum). Of note, the 1967 Hollywood film ''Rosemary's Baby'' - was based partly on the legend. 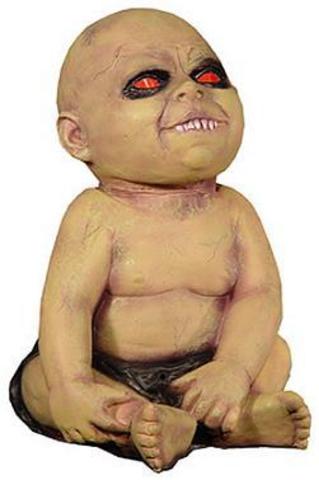