The Medieval descriptive term known as ''The Desert Fathers'' is related to those known Hermits who took to The Deserts of Egypt and Syria – to live a more secluded and prayerful religious life. These Religious Persons would write their experiences down and were seen as a comparison to The Western Bible. As such, these ''Founding Fathers'' would have a profound and lasting effect on both Eastern and Western Catholic religious observances. Some of the earliest writing of a Desert Father, dates to 270 AD with those of St. Anthony The Great. His observances would lead to the practice of Desert Monasticism, greatly sought after by those Religious who wished to completely observe the teaching of Christ. Much of The Desert Fathers writing were incorporated into Church Dogma (belief), in both Sects of The Catholic Church. However, after The Great Schism of the 11th Century AD – much of these teachings would be regulated to The Eastern (Orthodox) Church. Few examples were kept and followed by The Western or Roman Rite – save those that could be used as a form of exacted penance that some self-proclaimed Pilgrims would adopt. Today, The Desert Fathers are often held up as a form of steadfast Christianity not seen in modern times. During The Middle Ages, their ''exploits'' at self-denial, mortification and piety were often emulated by Royalty and Commoner alike. Many of their tales would form the basis of several Military Religious Orders that fought in the many Crusades of the 13th thru 15th Centuries. 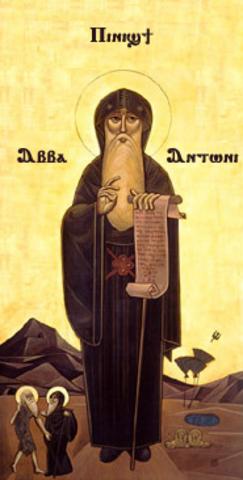