Another component in The Passion of Jesus Christ, was the reputed ‘’Crown of Thorns’’. According to The Western Holy Bible’s (4) primary Gospels of The New Testament, Christ was condemned to be Scourged (beaten) by The Roman Governor of Judea, Pontius Pilot (at the request of Judaic Priestly Authority). After He was whipped, Christ was said to have been further ‘’chastised’’ by His Roman Guard. One of His harassments, was to be made to wear a ‘’Crown, crudely fashioned from Thorns and dried vine’’. Shaped into a ‘’cap’’ resembling the Head dress of Royalty, it was crudely forced into His scalp, causing great pain and blood. Christ was forced to wear The Crown all the way to His eventual death on The Mount of Golgotha. Most Theologians agree that there is not conclusive evidence to determine even IF Christ was subjected to such torment. Many agree that The Crown of Thorns was nothing but a form of Religious ‘’popular piety’’, beginning in The Middle Ages. But then too, during The Great Relic Collections of that Era, ‘’Crowns of Thorns’’ began to show up in collections owned by Europe’s Kings and Queens’’. According to most ‘’Legends’’ The fragments of The Crown of Thorns were found in the 4th Century AD by Empress Helena (during Her discovery of The ‘’True Cross’’). Several ‘’complete examples’’ of The crown are known to still exist. The one most seen on display was actually owned by Emperor Balwin of Constantinople. After defaulting on a Loan, He sold it to The Lender (Venetian Bankers). Later, it was retrieved by The Western Catholic Church , who gave it to King Louis of France. It was then given to The Cardinal of The Cathedral of Notre Dame. This ‘’version’’ of The Crown is said to contain (70) smaller pieces of the original Crown, entwined into a circular pattern, and placed inside a circular Reliquary. 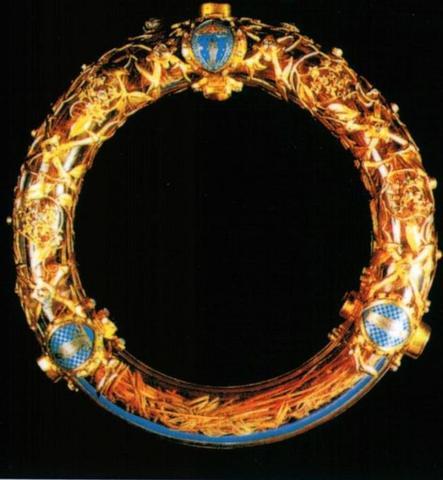