A name not known (today), Bridget Cleary and her ultimate demise – was a well known tale in late 19th Century Ireland. You see, Bridget was said to be a ''Changeling'' (Demon) – or at least that was what Her Husband believed. Bridget was a hard working woman, born and reared in Tipperary, Ireland. Married young, Her Husband was a Milner. As such, He went to where ''work was'' and the two were separated for much of Their early life together. Bot to be undone, Bridget worked hard and eventually became a Dressmaker, making Her own money. Her Father, a retired State Laborer, was elderly. As a result of His pension, He was awarded a ''lifelong home'' (shack really). As such, Bridget had a home (and consequently, so did Bridget's Husband – who soon returned). It was with this ''reunion'' that things began to go ''array''.

Bridget's Husband stated later in Court Testimony – that His Wife ''was not Herself''. Despite the fact that they spent very little time together – He was sure that Bridget ''was not'' – Bridget. According to Him, she was ''spirited away'' by Fairies – who promptly replaced Her with a ''Changeling''. These ''Beings'' (as we have seen), are ''constructs'' made by Fairies to replace Humans. A ''Doppelganger'' (if you will), which allows Fairies to abscond with Human and ''transport them'' to Their ''realm''. They replace Humans with an often evil twin. It was this ''Entity'' that Bridget's Husband was faced with. Telling His friends (who likewise were superstitious), The Group tried various ''remedies'' to ''remove'' the Changeling and bring back Bridget. All attempts failed.

It was later learned that Their House was actually built over an ''ancient'' Fairy Fort. These ''mythical structures'', as we have discussed previously, were once thought to have been ''defensive structures'' built by Fairies. ''Building'' on such ''hallowed ground'' would be seen as an ''affront'' to Fairies. Perhaps it was this reason that caused the ''switch'' with Bridget. Bridget became ill. So ill – in fact, that a Priest was brought in to administer ''Last Rites''. After leaving however, Bridget's Husband summoned His friends to help Him ''finally rid'' Him of this ''Demon''. Bridget was covered in urine and placed VERY close to a fire, in hopes of drawing out ''The Demon''. When this failed, the Group ''decided'' to use ''physical force'' to ''remove'' The Changeling. They ''beat to a bloody pulp'' poor ''Bridget''. Once completed, The Group took Her body to a field and dug a shallow grave. Her corpse was dowsed with petrol – and burned!

It too little time to bring suspicions to Bridget's Husband. The Priest who administered The Ritual (as well as friends'' – all came to check on the poor girl. Bridget's Husband stated she had been ''sent away'' to ''heal''. In short order though, Bridget's mutilated and burnt body was discovered. The Husband was naturally arrested (as He ''rolled over'' on His ''friends''). In a whirlwind Trial which cited ''The Changeling'' Theory as a defense, all were found guilt of murder. Despit this, none of the conspirators were charged with the crime of Homicide. Her Husband only received a 20 year sentence of ''hard labor'' of which He served only 15 years. He was released and emigrated to Canada – vanishing into History. Could it have been murder or something else? Perhaps we will never really know. But it should be noted, Bridget's home was razed and nothing was ever built in it's stead! 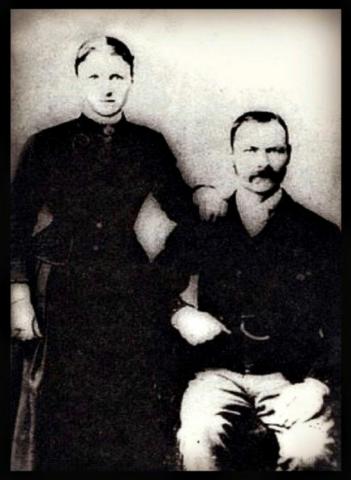