A very strange, not often heard tale comes to us fro Bald Mountain located near Chebalis – Washington State (US). Inside Lewis County in November of 1974 – reports of a ‘’strange, bright light’’ which ‘’crashed’’ into the Earth were called into the local Sheriff’s Department. Oddly, but predictably, no Officials investigated. Several days later, a Couple was driving home (near the supposed crash site) – and saw what appeared to be a ‘’greenish glow’’ off in the woods. They stopped and investigated. As They approached the source of the ‘’glow’’, They stated They ‘’saw’’ a ‘’horse sized creature’’. The Entity had ‘’scales and flippered appendages’’. The head of the creature appeared to have some sort of ‘’antenna’’. The Beast did not appear to ‘’notice them’’. Rather alarmed at the strange sight, the Couple ran back to Their vehicle and went home. They called the local Sheriff and made a report. Days would pass, but a Deputy made contact with Them at Their home. The Official stated that their Department had reported the encounter to The US Military (Air Force). Later that day, driving the same road past Their encounter, The Couple reported seeing ‘’many Military Vehicles off road and dozens of Military Men without any insignia or identification’’. No further information or contact by and for The Couple was ever made until They reported the strange encounter for a UFO Magazine Journalist who was doing a piece on ''The Bald Mountain Critter'' as it was now referred to. 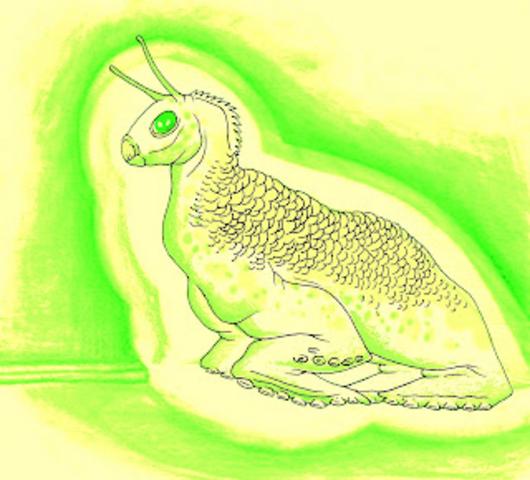