Hoaxing is a common part of UFO investigations. Although expected, it does hamper one's ability to (as is said) to find The Truth . Such may be the case with the infamous Area 51 Alein Interview Tape. Dated to the year 1996, it is an audio and video reportedly made at Groom Lake, Nevada. Groom Lake is the site of the even more infamous Area 51 . This Top Secret US Government base is where many think The US Government hides captured Alien Crafts and back engineers said technology. MANY strange Objects and phenomenon have been reported over the skies of Area 51 . In fact, The US Government did NOT even acknowledge it's mere existence until the early part of the 21st Century (citing matters of National Security). Additionally, ANYONE who worked at Groom Lake were HIGHLY scrutinized as to how they were employed and were they worked on The Base . These Civilian Staff (Scientists, etc.) were flown into work and Bused in on tightly controlled Charter Buses. An Army of Armed Guards (who will shoot), patrol about every sector of Groom Lake. What they miss is controlled by a barrage of sophisticated audio and motion detection equipment. It still is so even today.

This makes our story even more strange. The 2-minute and 45-second video was supposedly smuggled out of the High Security Base. It came to light on a popular American Radio Show (which specializes in UFO and Paranormal Case Studies). In the Video, an unseen Man (only identified as Victor ) - is conducting an interview with a Gray-like Extraterrestrial Being. The Being appears to be bruised and possibly lacerated (leading one to believe it was the survivor of a Crash . The Being is apparently hooked up to various Medical Scanners. The entirety of the interview (which is mostly unheard in most copies) places The Being behind a Glass Window pane (much like a Police Interview Room). Occasionally, the Viewer can see the reflection in the glass of what appears to be some sort of Military General's Rank (reflecting off the glass). Further, the bottom of the film is etched with the wording DNI and a series of possible time stamp numbering.. The DNI refers to Department of Naval Intelligence .

Although Victor's copy was a DVD/Digital Transfer, He claims that the original film was a 35mm. He further stated that it may very well be lost footage from The Roswell Crash in 1947. Many skeptics have taken the Video apart (as it were). Without anyway to accurately date the ORIGINAL 35mm Print, this will always be the case. Although the appearing technology is consistent with the late 1940s through 1950s these could well be film props. As for the realism of the supposed Being - that is up to conjecture. 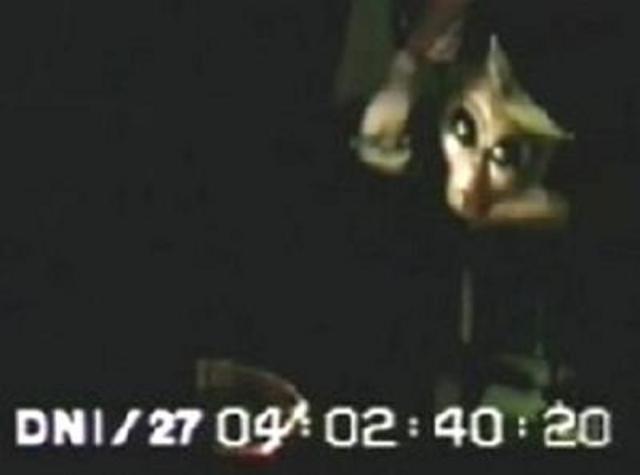