This is a very strange story. As it was witnessed (and told), the skies over Nuremberg, Germany in 1561 was the stage for what sounds like something from the movie Star Wars . In fact, the eye-witness accounts of the incident sound very much like an air battle between 2 (or more) Alien Races. This is what was seen. Around early dawn on April 14, 1561 - ''large triangular shaped Objects'' (Black in color), plus ''hundreds of Spheres'' of different colors and consistencies) flew over The City of Nuremberg. Strange ''beams of light'' were said to be seen coming from some of the Ships - that ''struck others and caused them to be enveloped in thick black smoke, falling to the ground at far distances'' . This battle went on for the better part of an hour, before all the Objects flew off. Naturally, the thousands of people who witness this strange event said that it was a sign from God to repent their sins or else. Many paintings were made of the encounter. It made it into many Illuminated Books of the day and the story was quite well known for hundreds of years. (What do You think It Was? ) 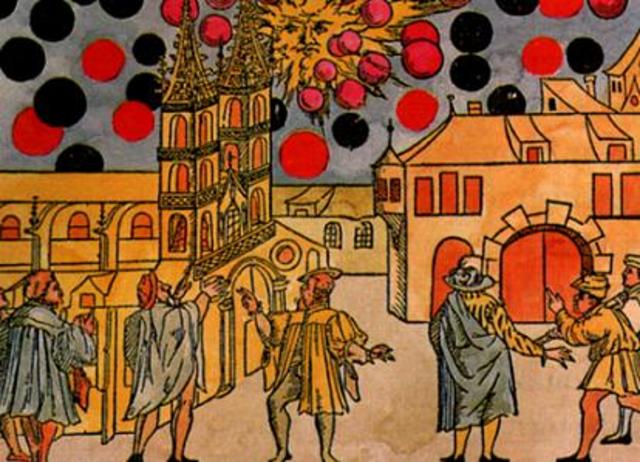