In The Middle Ages, The Catholic Church held sway over most facets of Society. In their Religious practices for Monks, Priests etc. - their primary goal was to be involved in a life of ''work and of pensive contemplation''. Work involved working farms and fields to help produce food for their Monastery as well as a means of selling such for monies. In their prayer life, it was to give attention to a ritual known as ''The Divine Office''. As Clergy, many Nuns and Monks were required to offer prayers to God. Around the 4th Century AD, Monasteries began to use The Biblical Psalms. This particular Book of The Holy Bible contained 150 prayers of supplication, forgiveness and praise. Clergy were required to pray (recite) these to themselves at certain time periods through their day (which began at 12 AM forward). To provide a ''space'' in-between each passage – The Prayer of The ''Our Father'' was placed. The Latin Vulgate translation is ''Paternoster''.

Still, remembering ''where'' on left off could be daunting. Often, a ''collection'' of 150 small pebbles were place into small contains as a means of ''maintaining place''. Sometimes, the pebbles were simply take from one pocket of a Monks Robe, and placed into another. When one pocket was full, the prayer was ended (or begun again for a new day!) Around the 4th Century AD, a small series of wooden beads – formed into a string or Chaplet was developed for use. Versions of such were already in usage as Prayer Beads in Islam (Middle Eastern Religious belief). It is though the ''idea'' may have migrated to Europe via trade. The Chaplet (originally) was composed of 150-beads, arranged into groupings of (10) – called Decades. The beads were joined at an end by a small Tassel. The Paternoster would remain a mainstay with Monks and Nuns until The Paternoster ''evolved'' into another well known and still existing prayer ritual and device known as The Rosary (14th Century AD). 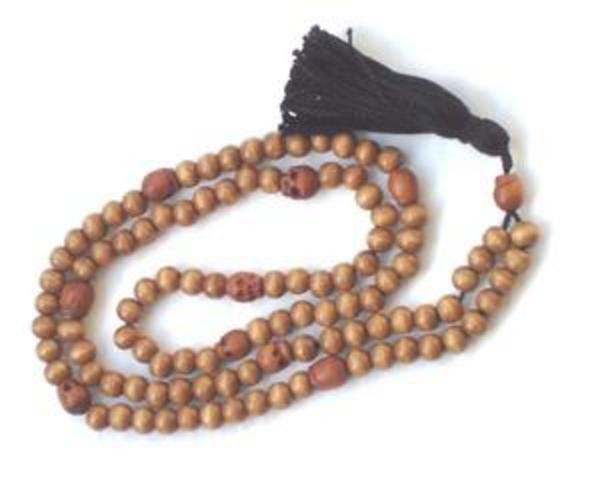