''Noire Chatte'' was a ''variation on a Theme'' in Torture and Execution – popularized in 17th Century AD France. A type of punishment for those Women convicted of Witchcraft. Much like being ''Burned at The Stake'', those convicted were taken to a public space. The Victim was placed inside a wrought iron cage with as many black cats as could be found. Cats were seen as ''Pawns of Satan'' (Familiars) and especially associated with Witches. It was also thought, that – at the moment of actual physical death – a Witch could transfer Her ''Soul'' into the feline. The cage and it's ''contents'' was raised to 6 to 8 feet off the ground. A large pile of wood and hay was so placed underneath. Once ignited, The Victim (and the cats, of course) – would start to burn. Naturally, the felines would become quite panicked and claw at The Victim – trying to escape (coupled with slowly burning alive, One was mauled). Should The Witches ''Spirit'' try and escape – She would not be able to ''jump into'' a Cat – and escape as well. While not widely used, ''Noire Chatte'', also known as ''Black Catting'' would not be used as a punishment for Witchery much past the 1780s. 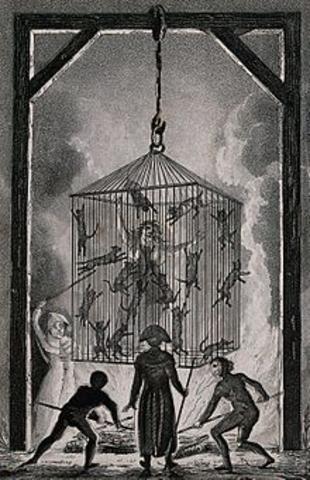