North American Indigenous Peoples (Native Americans), were a remarkably well grounded and Cultured Group. Often disdained by European/American Cultures as “primitive”, this was not correct. Native Americans  (as were most indigenous people), very much in tune with Nature and their “place” in The World. This can also be said of their Tribal burial customs. Regardless of the Region of habitation, all Native American Tribes had a protocol for the “departed”. Although similar in many ways, all were “fine tuned” to the particular Tribal beliefs. Native Americans are linked to migration into The Continent, roughly 12,000 years ago. Much speculation places their “point of arrival” from Alaska and The Bearing Strait (once a solid land Bridge between North America and far North Eastern Europe). Others cite migration from South America (North), into what would become The Southwest Regions of future America. Many Eastern American Seaboard (Coastal) Tribes cite migration from Upper and Lower Canada (also linking possible migration from The Strait). Once firmly established, Tribal Culture developed. Although many Tribes were stationary, and equal number still maintained a migratory mentality. This was a pivotal point with their funerary customs.

Most Tribes were Nativists. A strong belief in Man’s place and harmony with Nature, was practiced with at times precise detail. Some Tribes used a more “traditional” approach and buried their dead in Graves in the earth. Often great Mounds were constructed to honor the deceased (especially a Chief or Leader). In some Cultures, after decomposition took it’s natural course, remains were disinterred. The bones of the deceased were cleaned and reburied. In these cases, Family would continue to “visit” the departed  (even have yearly Feasts in their honor). Other Southwestern Tribes practiced Cremation, scattering the ashes to “The Winds”. This was seen as a way to “join” the deceased with The World. Some Tribes felt that the body of the deceased was only a shell. Conversely, the deceased would be left out in the open, to be “devoured” by wildlife. While death was not “feared”, some Tribes did have a healthy respect for possible “vengeful” Spirits. The Apaches of The American  Southwest, quickly burned and destroyed the possessions of the deceased to “keep the Spirit from coming back and inhabiting them”.

Perhaps the most well known Native American burial custom, was The Burial Platform or Scaffold. This particular funerary customs was popular among The Northern Plains Tribes. The custom was to wrap the deceased in fine blankets completely. These would be lashed tight so that only the “form” was seen. A wooden platform of 4 Poles with a small “bed” was attached and raised. Often, the personal possessions of the deceased were left. This was especially true of Great Warriors. By doing this, it was assumed the deceased would have just possessions in The Afterlife. The remains were left to decompose, naturally. Often whole “Cemeteries” of such were made on The Plains. Considered a “Sacred Place”, many a curious “White Man” ended up “full of Arrows” for trespassing upon such ground. Although seldom practiced today by Modern Native-Americans (who have now embraced traditional European burial practices), some Traditionalists still subscribe to the Ancient ways. These practices are only allowed on Tribal Lands, however. 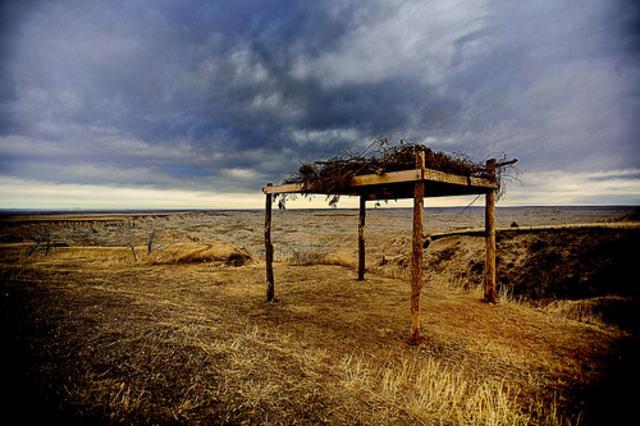