Another one of American Film Director William Castle's shock horror/thriller films, ''Mr. Sardonicus'' was made in 1961. As with most Castle films, the ''terror'' is often a moral issue (resolved by good sense). The story is set in 1880. A famous English Doctor has been summoned to the Mansion of one Baron Sardonicus. A wealthy Burgo, - he has a mysterious medical condition (which no Physician has been able to cure). Our good Doctor is Sardonicus last hope. According to Sardonicus, he was once a poor farmer. He lived with his shrewish wife and his father. His wife is not content to be the wife of a lowly farmer. Poor father purchases a Lottery ticket (which turns out to be a winner. Now rich, they all plan their new lives. Unfortunately the excitement is too much for Dad (who dies of a stroke). Saddened his Son buries him. When time come to case in the the ticket, it is remembered that the ticket is still in his dead father's pocket (buried with him). Having to dig up his father, Sardonicus see's his father's decomposed (and grinning visage).

The fight permanently freezes his own face into a large grinning skull-like visage (much as his father). When his wife beholds his face, she runs off  terrified and commits suicide. Sardonicus now has all that he dreamed of  except peace. No amount of money or Doctors has been able to help him. He is a recluse. Hearing of our good Doctors new treatment in muscle relaxation  Sardonicus will pay anything for the chance at normalcy. Sardonicus now has a new wife (a paid, arranged marriage at that). He treats her very cruelly. Soon a relationship develops between her and out Doctor. Giving Sardonicus the new medical treatment, the two new lovers run away to safety. Sardonicus awakes and sees his handsome face has returned, but he cannot open his mouth or talk. He sends his servant to search out the Doctor. Finding him and Sardoncius wife at the train station, the good Doctor tells him the paralysis is strictly psychological (based on Sardonicus' guilt). Once he reconciles this, he will be able to open his mouth. Going back to the Mansion, the servant (having had enough of Sardonicus and his years of cruel treatment), tells his Master that he could not find the Doctor. This condemns Sardonicus to a slow death by starvation (much to the delight of the servant! 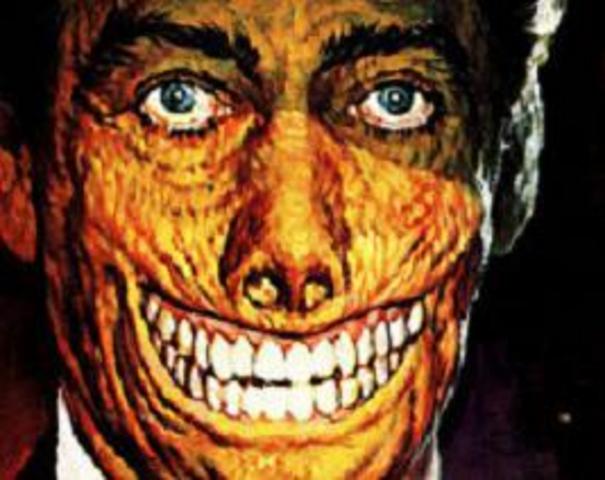