Los Angeles, California at the beginning of the 20th Century was a mecca for The Wealthy. Well heeled persons and business tycoons all wanted to develop the rich promises of the burgeoning City. Likewise, land owners began to develop some of The West Coasts most opulent and luxurious Hotels to attract Them. The Rosslyn Hotel was one of them. But as we have seen before, such properties often become well known for OTHER things. The dual Towers of The Rosslyn started out as a single structure, built in 1914. In 1923, the second ‘’tower’’ was completed. The Hotel earned the name ‘’Million Dollar Hotel’’ due to it’s huge building price tag. 1,100 well decorated rooms and 13-floors each. It was once the largest Hotel on The Pacific Coast.

But things do change. After World War II (1945), the demographics and business models anticipated for Downtown LA changed. People and businesses began to move West into Beverly Hills and Santa Monica (to name a few). The Rosslyn, like many other Hotels began to slowly deteriorate into disrepair. They attracted the very dregs of Society. From Homeless to Drug addicts to Prostitutes, soon that was all that inhabited the once majestic Hotel. By the 1970s, The Rosslyn was decrepit. In the late 1980s, The property was brought and renovated, in the hopes of crafting up-scale apartment Lofts. But even in this and a new name ‘’The Frontier’’, The New Owners couldn’t make a go of it. The once Rosslyn quickly reverted back to it’ previous ‘’flavor’’.

Renovated once again with Government funding, The Rosslyn was turned to into low income housing for Homeless and The Poor. But the property soon became known for something altogether different. It’s stories of hauntings. It is estimated that roughly 300 Souls have died within her walls. Most of these were from drug overdoses – but some were natural causes. The buildings also saw their fair share of murders as well (again related to drugs and prostitution). It was from these cases, Staff (in particular it’s Security Staff), began to report very strange occurrences.

From ‘’cold spots’’ (moving) inside warm and muggy halls, to the unmistakable odor of decomposing flesh (which also moved thru the halls), all manner of paranormal activities have been reported. CCTV Systems have records spectral images moving thru frames in areas where no one was – or could be. Which leads us to The ‘’Lady in Red’’. It appears that during the last series of renovations, it was discovered that in the basement of The Hotel (buried by debris and rubble), was a 1920s Speakeasy. These ‘’Bars’’ sold illegal alcohol during The Prohibition Era. Most were run by Mobsters, transplanted from the East Coast or Mid-West. Some swear that The Rosslyn Speakeasy was run by a Lieutenant of none other than Chicago’s own infamous ‘’Al Capone’’ (although no clear cut proof can be found). The Speakeasy was renovated to appear pretty much as it would have looked. But oddly, of all the water damage and mold in the beginning, an almost pristine wall mural was found. A ‘’dancing woman’’ wearing, you guessed it – a ‘’Red and White Dress’’. Staff claim that ‘’She’’ has been ‘’seen’’ often. A ‘’pale woman, walking the halls of The Hotel – Her shoes clacking along, until She just as quickly vanishes. And yes, She is accompanied by THAT smell of rotting ‘’something’’.

Some speculate that She was a former ‘’Mob Moll’’ (girlfriend) who died in The Hotel. Some state that she is nothing more than a ‘’connected Spirit’’ (One which ‘’wandered into’’ The Building from ‘’somewhere else). The Rosslyn still stands – used to afford ‘’down on Their luck’’ people a chance to come up from the terrors of ‘’The Street’’. But it is clear that ‘’whatever’’ haunts The Rosslyn isn’t going anywhere…….soon! 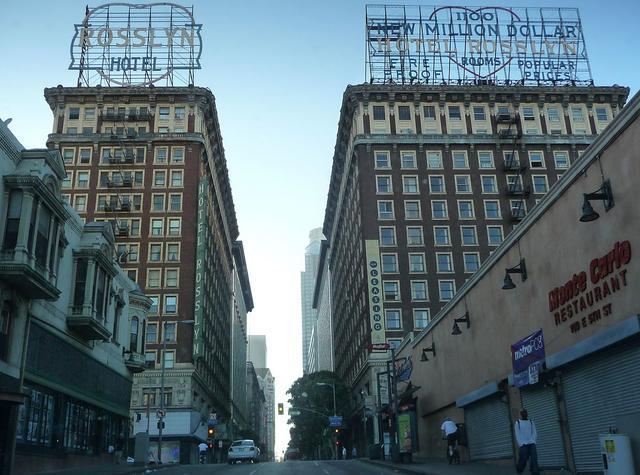