The Screen version of Mary Shelley's 1818 Horror Novel, was first put to film in 1910. Financed by Thomas Edison, the silent film ran for a mere 16-minutes. It was almost completely re-written (and bears only a slight resemblance to the book). Although, as with the book, it features an idealist Doctor who (intent on creating life from death)  gathers pieces of dead humans (arms, legs, internal organs etc). Sewing them together, he uses electricity to re-animate his creation  to horrible results. The Creature (shunned for his ugly and frightful appearance)  goes on a rampage. Wishing a mate (something of his own kind), he tried to manipulate our Doctor (with his own fiance). The Edison movie ends with the Monster being nothing but our good Doctors reflection (possibly alluding to his personality, ala Jekyll and Hyde). Another attempt was made in 1915 with Life Without Soul. This version was a whopping 70-minutes long (so long it was broken down into 5 parts). The Monster was depicted more as a Brutish Beast. It was not until 1931 (and the advent of Talkies just a few years prior) - that the first true Frankenstein Monster debuted. An unknown British Actor named Boris Karloff was projected into the starlight for his portrayal of Frankenstein's Monster. His image would serve as the template for most future versions of The Creation. Lucrative for The Studios, Frankenstein's Monster would be the fodder for 7 sequels (although Karloff only did 3). Although by 1956, our poor Monster had pretty much been worn out with audiences Worldwide. That was until a small (and relatively unknown independent Film Studio named Hammer, came along).

Again, taking an unknown actor named Christopher Lee, Hammer Studios filmed and released The Curse of Frankenstein (1957). Different from other filmed versions, Hammer shocked their audiences with copious amounts of stage blood and terrifying make-up effects. Fans loved it. The Monster was again reborn. Hammer launches a series of 5 films between 1956 and 1970 (some scary some attempting humor. American film companies were not undone either. Our Monster was transformed into an alien, a hormone infused teenager- even a female monster/Jack The Ripper type! The Japanese also took a stab at our hero, turning him into a gigantic (of course), beast that fights himself. It was not until 1994, that a half-hearted attempt to remake the film as close to the novel was made. Mary Shelley's Frankenstein featured an unusual casting of American Gangster portrayer icon Robert DeNiro as The Monster. Many critics still felt the story did not hit the mark. The last attempt was the 2014  I, Frankenstein loosely based on a graphic novel which meshes The Frankenstein legend with a more supernatural overtone. 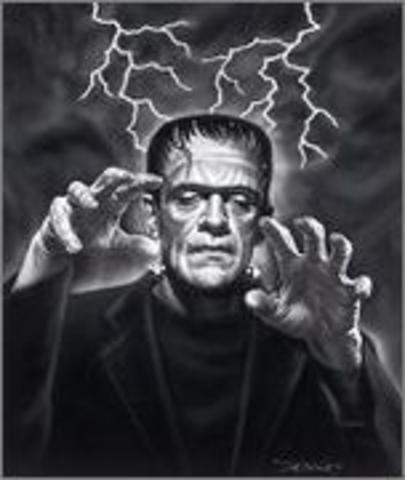