A classic part of UFO History, this possible sighting is found in The Bible (593 B.C.) In it, we find The Prophet Ezekiel in the desert describing what can only be the landing (and eventual Contact) by Alien Visitors. Naturally, (from a religious point of view) it has been said that The Prophet was relating a visitation by Messenger's of God . What is puzzling is the great detail put into the description. Even if we look at the passages with Modern eyes , Ezekiel's vision is nonetheless compelling and unusual. For brevity sake, I have included only Chapter 1, Verses 1-16 (in Paragraph Form):

In 1976, NASA Engineer Josef Blumrich, published his book titled The Spaceships of Ezekiel . In it, he re-describes for his Readers EACH passage as what someone from today would have seen (and described), using more scientific phrases . Below is Blumrich's translation of Chapter 1, Verses 1-16:

The Spacecraft begins at some distance from the Prophet in its initial descent. Vapor cloud seen is from the cooling preliminary to firing stage of a rocket engine. The Rocket engine is then fired. Looking upward, the Prophet sees four shapes surrounded by fire and vapor that look alive. These are helicopter-like bodies deployed before landing. The Prophet is now able to see more detail because the craft is at low altitude. He sees the four blades of the rotors and the fairing housings above the rotors that give the appearance of faces . He gives a description of the Landing legs. The legs have shock absorbers and round Footpads. The Prophet also refers to remote-controlled set of mechanical arms hanging along side the cylindrical helicopter bodies. He makes reference to the helicopter blades protruding outward. The Fairing surfaces, which protect the gears and other control devices above the rotors, look to the prophet like faces . The Fairings are irregular in shape with some raised and some cut out areas, all of which lends itself to an awe-struck interpretation on the Prophet's part. Because the faces are placed in different directions, we see that the rotors are synchronized at rest position. He refers to the rotor blades being divided. The suggestion is that there is a kind of gap in the control mechanism or Fairing. The last part of the verse refers to the rotor blades folded in an up and down position. Ezekiel refers to the Landing leg assembly and it's retractable wheels - as part of each leg assembly. He doesn't see the wheels until they are actually deployed in Verse Fifteen. Verses Nine, Twelve and Fifteen are interrelated. Ezekiel is referring to the flowing reactor radiator and the bursts from the control rockets. The lightning effect seen, comes from what would seem like leaping random fire - but in fact is controlled bursts from the various Control Rockets for stabilization purposes. The Spacecraft hovers and moves in various directions until a suitable landing site is found. The wheels are deployed. They appear at the very moment they become necessary. The greenish-bluish color of the wheels suggests a protective film or coating. A further description of an advanced reversible wheel is given. Ezekiel is confused and it looks to him like a wheel within a wheel . These wheels look like they are obeying orders. He has had seen wheels before, but these are puzzling. Thus he gives much time to their description. The craft rolls on the ground, probably in a maneuver to find the most suitable site.

Blumrich's examination goes into greater detail with regards to what could best be described as Beings wearing EVA Spacesuits (being described by a 5th Century B.C. Person). After which, Blumrich and other Scientists stated that they were planning on building a mock Craft to show what Ezekiel actually saw. Although not a working, Wheel within A Wheel - the device was VERY intriguing. As with most of these ancient stories ......(It Is Ultimately Your Opinion and Belief as to What Ezekiel Saw...........) 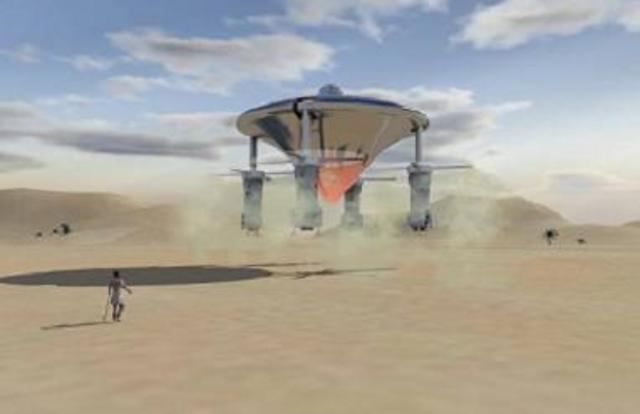