A component of Haitian Folk Magic – eg ''Voodoo'', The ''Drapo Flag'' (sometimes referred to as a Banner), is a cloth display which also serves as a form of Talisman (Amulet). Traditionally, A Drapo Flag would be flown or otherwise displayed over or within a Temple (place of worship). Drapo Flags can be of any color, but Red is most often seen (as Red is the color of The Ghedes or Spirits). Normally, the particular Spirit invoked for overall protection of a Temple and it's Congregation is identified on The Drapo Flag by the previously discussed ''Veve'' symbol (of which each Spirit has it's own separate symbol). Later, actual embroidered imagery, normally of a particular Catholic Saint, was added, very much as an Icon would be used. As we have seen, Haitian Folk Magic ''uses'' Catholic Religious Symbolism as part of it's practices (mush to the confusion of many).The Drapo was once outlawed by local Government Authorities in Haiti in the 1920s and 1930s but is no seen as ''protected'' as a ''religious symbol''. 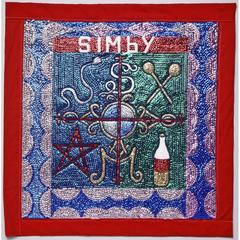