In a discovery dated to 1725 by Assistants of then noted Doctor Johann Beringer – The ''Beringer Lying Stones'' were seen as an archaeological oddity and later labelled hoax. Beringer’s hobby was archaeology and as was popular in Germany at the time, most Academics ‘’dreamed’’ of finding true proof of Ancient Civilizations and Cultures, unknown. In the mountains of Wurtzburg, His Assistants claimed to have discovered a cache of ‘’hand hewn’’ flattened stones, which bore strange inscriptions that identified them as being ‘’Ancient Jewish’’. This was seen as probable proof of an Ancient Civilization of Jewish background (or a Colony of Judea), dating back thousands of years. In fact, one such ‘’stone’’ was advanced for it’s ‘’Hebrew Inscription’’ for the name of ‘’God’’. Rather than more testing and research, Dr. Beringer decided to publish His findings. Over the next several years other Scholars determined the stones to be faked and not of their purported age. The ‘’scandal’’ destroyed the archaeological reputation of Beringer. Still later, His Assistants were alleged to have confessed to having faked the discovery as a means of bringing fame to themselves and the Doctor. However, all traces of their ‘’confession’’ has vanished. The majority of the stones are still keep in several European Museums on display, with some Modern Scholars stating that the initial experiments into the stones age being done incorrectly. A such, a small ‘’camp’’ of Scientists truly believe the ‘’Lying Stones’’ to be just exactly what they were thought to be….proof of an ancient Judaic Culture that colonized Ancient Germany. 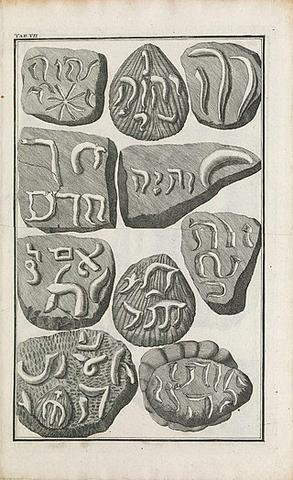