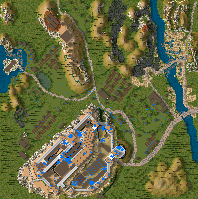 History of the castle Kollnburg

• mid-12th century .: The Castle of the Counts was built from sheet to protect the treasure.

. • by mid-13th century .: The Counts of Bogen dominated the whole middle Bavarian forest.

• 1468: The castle was destroyed in the war Böckler partially. •

• 1493: Kollnburg was sold to the reconstructed castle.

• to 1806: The castle remained with changing owners nor a knight fief.

Today only a massive tower and a fountain there.

You are the Wolf, and your reign will endure 25 years. Your task is producing something.

In the West Obertauriens since 1206 romp Small wars between The ambitious free trade towns and Negre- knights who defend sometimes as robbery barons their privileges. The town Winhus and Casimir ,Heir of Kollnburg, make therefore an alliance one which challenges the Negre.

General, further information can be found at the recent castles.