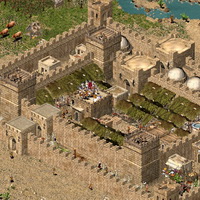 These are two AIV files for two largest Lionhearts castles. I didn't change much on those castles, I only added two more gates to each of the castle. Both of those castles have a great potential, they both have large number of workshops, but workers had to go all way around to castle to bring their goods, and this way it is also more possible for them to die. This way castles will be more efficient, and Lionheart will be a greater challenge.

Besides that, I didn't want to effect some other aspects of the game, such as Crusader Trail, etc. so that is the reason why is everything else left to be the same.

Third thing I cared about is multiplayer - if players have different AIV files, then it will be possible to play, but Lionheart wouldn't be building any castle. This way six other Lionhearts castles are unchanged, so if you decide to play multiplayer and the game will always choose of the remaining six AIV's, and Lionheart would build his castle. If you want Lionheart to build the modified castle in multiplayer as well, then all of the players must have these two AIV files.

Here are previews of the two modified castles.